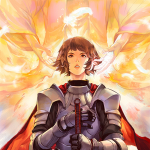 I'm a big fan of the Overlord story and have watched the Anime (13 episodes and 8 Pleiades Specials), still patiently reading through manga, listened to all of the Drama CDs to-date and have finished the 10 Volumes of the LN plus the Blu-ray specials. (As of August 2016) Overlord has been one of the most entertaining story universes I've gone into and is something I eagerly look forward to coming to completion.

This community has been quite welcoming with many excellent and multi-faceted discussions on the story plot lines, characters and fan-theories. I continue to look forward to informative exchanges and laughs between the fans within this community.

Here's my own ideal character build for Yggdrasil:

Lore: Automatons and Mechanoids of various designs and purposes arose upon the Fall of the Valkyria. Artificial beings made of technology that are both similar and different from Homunculi and Golems. Alike Golems, they are creatures composed of artificial compounds but upon improvement and enhancement they adapt to become able to recreate the biological functions and begin to mirror living things, now having traits alike that of Homunculi.

Automatons, being the base class of their race, are mere human/creature-shaped objects lacking any form of biological function and boasting abilities that far surpass the being from which they were modeled. Their shortcomings arise from their inability to retain mana and wield magic, though they are able to compensate for this with basic upgrades and improvements in physical abilities.

Mechanoids, being a step ahead of Automatons, are highly enhanced versions of the lower race class and far surpass their predecessors in a vast array of physical ability. From this point they adopt biological components that allow them to further mimic the beings from which they are modeled and access the innate abilities of their biological counterparts. Now they further recreate an image of life and begin to show something akin to a living soul and not just programmed machinery.

Enchanted-Mechanoids, the highest tier of their racial order, are "living" machines. Either by the blessings of mana or the birth of a true soul, these beings possess the best traits of their artificial nature and the ability to fully resemble and thrive alongside their biological counterparts. They are now able to wield magic and exploit their own artificial nature in optimizing themselves for certain tasks and specializations and even remodeling themselves, to a certain extent, in order to compensate for their weak points. They embody the ideal of preserving the immortal soul in a vessel not bound by a mortal coil.

Biochemist- "Alchemists intrigued with the inner workings of living things gradually step upon the realm of recreating life and producing artificial beings called homunculi. In their pursuit of "playing God," they discover higher orders of magic that give access to the creation of greater artificial biological constructs, medicine and pharmaceuticals that are infused with higher tiers of magic and even glimpse into the gates of the secrets of life."

Geneticists- "Artificial beings bent on the pursuit of knowing the secrets of life and recreating it in within themselves who have forcefully pushed a fusion of the might of magic and mana through alchemy, the depths of intellect in science through medicine, and the measured practice of craftsmanship are those who reach the Gates of Truth. All that's left now is to open them and usher yourself into the age of a new god of life, You."

*Spell-Charge Potions Crafted by Geneticists can store up to 9th Tier Spells.

Gun Mage- Amalgamating ranged combat and magic ushers in the creation of Gun Mages. This class gives access to the ability to weave magic spells directly into ranged physical attacks that are projected from gun-based weaponry.

Requirements: Racial Class of Automaton and Job Levels in Gunner (5) and Wizard (5) classes.

Retrieved from "https://overlordmaruyama.fandom.com/wiki/User:CrimsonWarden?oldid=92559"
Community content is available under CC-BY-SA unless otherwise noted.