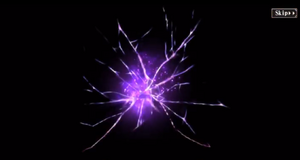 Rifts (た跡) is a term to refer to strange fissures in found throughout the New World and Nazarick in the aftermath of the Catastrophe in Mass for the Dead.

So far the cause of this phenomena is unknown, but what is known by the inhabitants of the New World is that monsters that go near the fissure go wild.

According to one theory, there seems to be some kind of poison that is leaking out from the crack, affecting organic matter creating a new breed of mutated creates known as Contaminated Beasts.[1] Infected creatures are not only the danger, as these rifts give birth to unique creatures known as Chaos Beasts. These being are wrought entirely of a strange substance known as Chaos Stones. The rifts act as gateways to the New World to another dimension known as the Chaos Zone. Occasionally the Chaos Zone spills out into the New World, for brief periods, bringing legions of its own ilk, before retracting back into itself.

Additionally it has been noted that the Rifts have disrupted the magical laws of the New World. In fact transfer magic is difficult and may not work. Resurrection magic is also impossible as discovered by Nazarick.[2] Attempts by Nazarick have tried to gleam what lies beyond the Rift, however their summons are immediately lost when they cross through the threshold. Even when the summon is tied with a rope, the link is immediately broken. It is assumed that the Rift connects to a world where conditions for living and nonliving materials are impossible.[3]

Retrieved from "https://overlordmaruyama.fandom.com/wiki/Rift?oldid=237741"
Community content is available under CC-BY-SA unless otherwise noted.