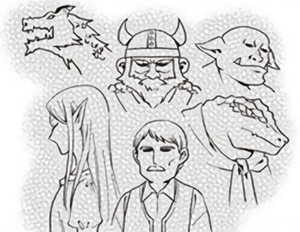 This page shows a list of races that has already made an appearance in YGGDRASIL and the New World throughout the Overlord series.

In YGGDRASIL, there existed a multitude of different races for players to choose from and play as them. Based on the game's setting, they were generally categorized into three main races; namely the "Human" race, "Demi-Human" race, and "Heteromorphic" race. The following context below is a list of the various races that were introduced so far in the Overlord series.[1]

According to the author Maruyama, in the context of the New World, there is no end to the war between races; a conflict will continue to exist and cannot easily go away. Even if one race happens to annihilate or dominate all other races through winning all wars, differences within that race can still result in war between them as well.[2]

Humanoid and Demi-Human races could not produce offspring together. However, mating between humanoid races like humans and elves is possible according to the Elf King.[3] Contrary to the notion that procreation between a Humanoid and Demi-Human was said to be impossible, in the Web Novel, there was a legend that spoke of a human princess who did manage to get herself pregnant with the Goblin King's child.[4]

Nonetheless, this meant that there is the probability for humanoid races such as humans to interbreed with other non-human beings is not entirely unattainable after all. Depending on the sorts of Demi-Human and Heteromorphic races out there, a human/humanoid should be able to at least mate with one of them if possible. For starters, Brightness Dragon Lord is considered to be the only dragon, one of the heteromorphic races known to have successfully impregnated a human among the humanoid races.[5]

According to Pulcinella, Demiurge is currently conducting a breeding experiment wherein which he used the captured humans as test subjects in mating with Demi-Humans to create hybrids.[6]

In YGGDRASIL, there was no penalties for player killing Heteromorphs as they were "monsters" but penalties did affect those who killed Humanoids or Demi-Humans to varying degrees.

Consisting of sapient species, Humanoids are capable of interbreeding due to similar biologies. However, Humans in the New World treat most others in this category as "demi-human" due to seeming similar but having obvious differences like horns, ears, height, or eyes. Humanoids also take all of their level-ups in Job Classes as they cannot have Racial Levels.

Some races seem human-like but have obvious skin colors or physical attributes like Goblins, Ogres or Trolls. But some have partly upright postures with animal-like features like Beastmen, Minotaurs or Lizardmen; sometimes referred to as "Bestials." Demi-Humans have a balance of job to race class stats, but also have a limitation to higher intelligence compared to Humanoids. That is not to say they aren't capable of higher thinking, such is the case of Zaryusu Shasha who built a fish farm after exploring the known world.

Also known as Inhuman or Monster Races, most of these races have features that appearing only monstrous, and can only appear human from abilities and skills. They can dedicate leveling up to racial classes limiting their job classes, or vice versa. Some are types of undead or otherworldly beings with many naturally evil aligned; while some are, or can be good-aligned.