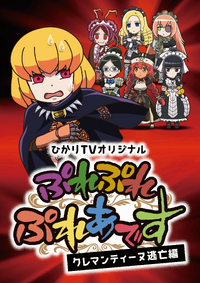 Clementine Fugitive Version (クレマンティーヌ逃亡編) is a spin-off of the Pure Pure Pleiades. It was released on November 23, 2018, on Hikari TV. It's divided into three episodes, each ten minutes long. The opening theme for this is Party Out !! and ending theme is Daily-go-round by OxT.

One of the 12 executives of Zurrernorn and former Black Scripture 9th Seat Clementine is on the run. Having absolute confidence in her arms, she sets out in life to escape and conceal herself from a certain magic caster. At that time, Nazarick is gathering information about martial arts under the direction of Ainz Ooal Gown.

Retrieved from "https://overlordmaruyama.fandom.com/wiki/Pure_Pure_Pleiades_-_Clementine_Fugitive_Version?oldid=247562"
Community content is available under CC-BY-SA unless otherwise noted.