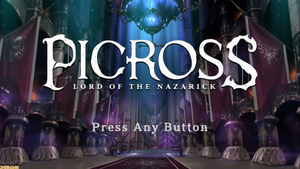 Picross Lord of the Nazarick is an Overlord-themed Picross collaboration game set to be launched via the Nintendo eShop on July 25, 2019 in Japan.

Picross Lord of the Nazarick is a puzzle game where players solve Picross puzzles with the various characters from the Overlord series. By solving Picross puzzles, players will recall the memories of the characters and key items that revolve around their story.

The game is set in the Great Tomb of Nazarick, immediately following the founding of the Sorcerer Kingdom. Ainz Ooal Gown and his followers plan further exploits at this point.

Retrieved from "https://overlordmaruyama.fandom.com/wiki/Picross_Lord_of_the_Nazarick?oldid=220991"
Community content is available under CC-BY-SA unless otherwise noted.