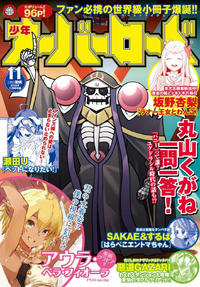 Overlord Official Comic A La Carte (オーバーロード 公式コミックアラカルト (角川コミックス・エース) コンプエース編集部) is a Japanese spin-off anthology manga loosely based on the Overlord series. This non-canon spin-off was licensed by Yen Press and was slated for an official English release.

On the other hand, the spin-off anthology series is also licensed in North America by Yen On. Currently, three volumes have already been published in English since August 27, 2019.

An anthology of Overlord manga stories by various artists. They draw from various angles, of the painful world of Overlord and Ainz!

Chapters not yet published in volume format

Retrieved from "https://overlordmaruyama.fandom.com/wiki/Overlord_Official_Comic_A_La_Carte?oldid=240283"
Community content is available under CC-BY-SA unless otherwise noted.