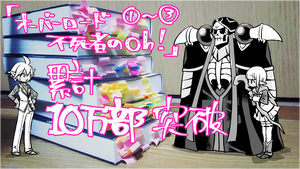 Overlord: The Undead Oh! or Overlord Fushisha no Oh! (オーバーロード 不死者のOh!) is a spin-off manga of the Overlord series. In the February 2017 issue of Kadokawa's Monthly Comp Ace's magazine, it was a four-panel spin-off manga that was launched alongside Overlord: The Undead King. It is a comedy manga series written by, Kugane Maruyama, the creator of the Overlord series, with art provided by Jūami and so-bin. As of now, nine volumes have already been published in Japanese since January 26, 2017.

On the other hand, the spin-off manga series is also licensed in North America by Yen On. Currently, six volumes have already been published in English since November 5, 2019.

Overlord: The Undead Oh! is a compilation of non-canon short stories, that revolves around the interactions between the members of the Great Tomb of Nazarick. The manga is a gag comedy series based on the original light novels.

Chapters not yet published in volume format[]