Unknown Intruder, this article requires your contribution to the Overlord Fandom!
It is clearly in dire need of a serious cleanup. You can help the Overlord Wiki out by improving it in a way that matches the wiki's layout guide and standards or simply providing a proofread and grammar check. 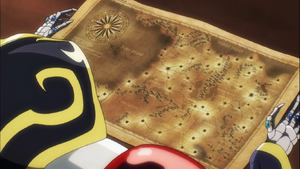 New World (この世界) is considered the tentative name of the unknown world, where the Great Tomb of Nazarick was supposedly transported to. Currently, the true name of this world has yet to be revealed.

In Volume 7's Author Thoughts Excerpt, Maruyama noted that the further away from the New World's present setting in the Overlord series, the more often humans are being used as slaves or considered food.[1]

The New World is a roughly typical "middle age fantasy world," yet there are many connections to YGGDRASIL in both history and culture. Ainz Ooal Gown's objective is to make his (originally his guild's) name an everlasting legend in this world.[2]

Ainz noted this world was like continental Europe which had recently come out of the Middle Ages. However, certain parts were said to be far more advanced than their modern age counterparts. For example, there were magic items that could produce light without fuel and electricity. There were leather pouches that produced, although not infinite, an unnaturally large amount of water. There were hemp baskets that could easily produce plenty of feed for horses. There were also pots that could produce seemly limitless amounts of strange-tasting wheat porridge. Due to these technological advancements created through magic, this world had deviated greatly from the World of 2138 that Ainz used to inhabit.[3]

Surprisingly, this world itself automatically translates all of the foreign spoken languages, including the nuance and details into a recognizable form. Thus, the mouth movements of a speaker may not match with the sound that the listener hears. Everyone accepts these translations naturally, but it is still necessary to learn letters in order to read the written language.[4] Specific nouns retained their original pronunciation, but other meaningful vocabulary was translated.[5]

"Humans" in this world are not Homo sapiens sapiens. This is why they can become stronger than beasts by training. The author called humans in this world, "Homo sapiens magitheus" (this scientific name itself is just a joke), and Homo sapiens sapiens became extinct a long time ago. In a way, compared to humans in the World of 2138, their physical abilities are not that of Homo sapien sapiens.[6] There were many nations in the center of the continent where the humanoid species were on the bottom of the totem pole.[7]

One has mentioned that the ocean is not salty, though the truth in that statement is doubtful. On the other hand, there were magical spells that produced salt, sugar, and spices, as well as ones which restored nutrients to the soil, removing the need for a fallow period in agriculture.[8] According to Ainz, the rainwater of the New World was regarded as still being pure and clean unlike the World of 2138.[9]

The magic weapons in this world were made by having a magic caster enchant a weapon produced by a blacksmith. In other words, a skilled magic caster was more important than a skilled blacksmith when it came to making a powerful magic weapon. However, there were exceptions to that rule. Magic casters like Fluder could make the stilettos which Clementine carried through his magical knowledge, but the same could not be said for Gazef's sword.

The inhabitants from the New World are considered to be extremely weak under YGGDRASIL standards. Gazef Stronoff, known as the strongest warrior of the Re-Estize Kingdom officially, had a hard time fighting against a devil of a lower level than the Death Knight (35). Fluder Paradyne, known as the strongest wizard of the Baharuth Empire possesses a strength that is comparable to the legendary Thirteen Heroes. While Fluder is by far the only native human in the New World who was able to use 6th-tier magic, Narberal Gamma and YGGDRASIL entities, on the other hand, can use magic beyond that tier level beyond it with great ease.[10]

In the past right, before the Eight Greed Kings began their campaign for world domination, the number of powerful individuals and monsters were far more common with the Dragon Lords being the overall dominant race. The ensuing power struggle diminished, all races including the amount of very powerful individuals and those of great power became, even more, a rarity by the present times. Additionally, the Eight Greed Kings treated humans very well and that resulted in humans having the chance to gain more control in the region.

However, this is the only thing about human society that has been shown to us so far. There are many other characters in human society, whose identities have not yet been identified completely, but can surely beat level 59 individuals like Lupusregina Beta (Demi-gods of Slane Theocracy)[12], and there are also those who aren't part of human society at all (Dragon Lords). If it's the case where the other party is a True Dragon Lord, not even all members of Pleiades will be a match against that extraordinary being.[13] One noted individual has been confirmed to have reached the upper mid 90's in terms of level and another was able to stand on his own against another player and a couple individuals even managed to defeat them. Thus True Dragon Lords can be considered the most powerful race of the new world outside of those from YGGDRASIL.

The Undead of the New World have been noted to have the capacity to reach individual powers that far exceed regular humans and demi-humans with several members noted to have reached a difficult rating of 150 or roughly equal to level 50 monsters thus labeling them as nation destroyers. However, most of them tend to stay isolated from the outside world and prefer to continue to research and improve their magic and experiments. Meanwhile, some have even organized themselves in groups to keep tabs and not interfere with one another. More so, some individuals are noteworthy to have mastered the 8th tier, the highest tier confirmed thus far that any new world inhabitant has mastered outside of those from YGGDRASIL.

Still, one could train to be a warrior, a magic caster or a rogue. It was not just humans who could train themselves in such techniques. While creatures with racial advantages generally were not inclined towards such training, some of them would put in the effort to hone such skills, and that made them very difficult opponents for humans.[16]

This is the Nazarick enemy power scale:

The following is mentioned by Maruyama in the Author's Blog Chat covering the power level of the new world:

From that, we can guess that the plain listed Gazef/Brain/Gagaran/Zero/Zaryusu/Climb and the like are using standard equipment. As Brain without a sword, he would most likely not beat Zero, a monk who doesn't need a weapon.

The author Maruyama mentioned that in the world of Overlord series, a person’s physical strength is decided by 3 things: Basic strength (decided by race and training) + Level (the power of evolution) + Class build (mysterious power from the laws of magic).[17]

The only official level shown for natives in the New World (taken from all the character sheets) are prominent lizardmen[18], Gondo Firebeard[19], Olasird'arc Haylilyal[20], and Pe Riyuro. Whereas each respective character sheet for others like Gazef, Brain, Climb, and Gagaran, there has been no reveal of their estimated level.

Process of Leveling Up

In the New World, living things which have a high level also possess a high defensive power. Similarly, even if they are struck by magic, the damage is affected by the level difference that sets them apart from each other. Though it is impossible to be unhurt if one’s eyeball is pierced. For starters, some monsters out there may snap. Particularly dragons among other ones along with it, usually face the probability of injury and death can change based on what kind of edged instrument is used.

As for Level Up (growth), it's a kind of evolution of the species which comes from the author Maruyama’s way of thinking. Even if the same edged instrument is used to stab, the degree of the wound would differ between a bear and a human. That’s the sort of impression at play there. The reason high-level humans have a high resistance rate to poison and illness is for a similar reason like it. That is to say Level Up is an evolutionary growth process into a superior living thing. It's the first step to becoming stronger over the course of leveling.

The gathering of similar magical power gives rise to a massive field. One can also train their body in addition to this. There is always the individual's physical strength started from a foundation which can be trained further. Coinciding with this training is also the idea of the Level Up Physical Strength (evolution) + and various corrections from classes etc (power that comes from unfathomable magical power) should be the plan.[21]

In other words, Levels equate to what is called Evolution. There tends to be variable magical augmentation which is relative to the level of others. For instance, if a person has a certain Level, this magical energy would work to diminish attacks from those whose Level is lower than them. Levels themselves physically alter the person's body in perceptible ways. Levels or at the very least the Mana and stats are given from it seem to stay with the body.

Most of the spells derived from this magic in the New World are ranked by tier, like in YGGDRASIL. However, 6th tier or below is the only thing the world's natives have knowledge or use of as most of them had never heard of those ranking above it except a few like Evileye. Tier Magic was said to have been used by the Six Gods six hundred years ago. When the Eight Greed Kings arrived a century later after the previous group of players, they were able to effectively spread the existence of Tier Magic to the point that people began acquiring it and learning it over their traditional magic system. Although New World inhabitants were following the same system of Tier Magic as the players, they happen to develop and create new tier spells that are different from YGGDRASIL standard. For instance, the 0th tier is unique to only the New World which cannot be found in the game.

According to Fluder, Wild Magic was supposedly looked upon as the primal magic of the New World before modern Tier Magic from YGGDRASIL was introduced. At present, the scarcity of users remains extremely small in numbers due to how difficult it was to cast as well as the following conditions required to use it like a Dragon Lord's bloodline, etc.

It has been confirmed that one cannot cast both Tier Magic and Wild Magic as the two principles of magic are incompatible with one another and would be rendered useless, however, there are loopholes that can bypass this restriction if certain conditions are met.

Prior to the introduction of Tier Magic into the New World, Runecraft was considered the original magical art used by dwarves in the past. However, it was viewed as outdated later on when Tier Magic was proven to be more superior in terms of magical enchantment effectively.

Exclusive to the New World, martial art skills allow the user to move in ways, which are normally physically impossible. So far, it can only be learned by natives born within that world.

Talent is a kind of innate ability that 1 in 200 can get in the New World. The talent's worth can be varied depending on the user's ability, job, circumstance, etc.