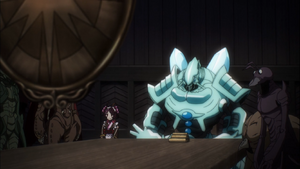 Nazarick's NPC Experiment is a form of experimentation conducted by Ainz Ooal Gown.

As an experiment, Ainz wanted to test if it was actually possible for his servants, who already had their settings fixed, to learn new things beyond what their programming allows them to do. This experiment concerned with proving whether they could continue to develop after learning tactics or strategy.

Appointing the NPC with a certain task to be in charge of when it is not suitable for their own main classes/roles.

It was considered a success by Ainz as Cocytus was able to take command over weak undead and guide them in the flow of battle and war with the Lizardmen from the Great Lake. Ainz simply thought that through an NPC's defeat, they could probably learn more from their mistakes. Ainz was pleased with the experiment's result as there was the possibility of such character growth happening within the NPCs where knowledge could be expanded upon and developed.[1]

Retrieved from "https://overlordmaruyama.fandom.com/wiki/NPC_Experiment?oldid=248597"
Community content is available under CC-BY-SA unless otherwise noted.