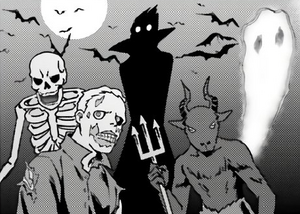 This page shows a list of monsters () appearing from YGGDRASIL and the New World throughout the Overlord series.

In the Web Novel, monsters from YGGDRASIL were limited to six special abilities, but it does not even include the usage of magic involved. Most of the abilities were centered on roles for recovery, attack, defense, and support purposes. It was extremely rare for them to have any other types of abilities besides that. The only ones who were able to utilize the vast variety of magic in YGGDRASIL were none other than players.[1] Additionally, weaker monsters like zombies and skeletons tend to spawn faster than stronger monsters.[2] When encountering players nearby, monsters could detect them with their programmed senses which are vision, hearing, smell, and magic.[3]

In the New World, powerful monsters like Eight-Edge Assassins or Fenrir are known to be found crawling around in the unexplored regions.[4] According to Gondo Firebeard, it was revealed monsters that burrow through the earth was capable of sensing their opponents’ location and where they are at through the vibrations made in the ground.[5] While so, demihumans were the kind who grew stronger with age.[6]