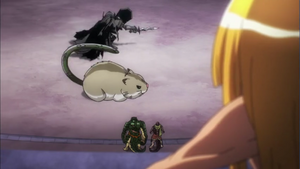 Nazarick's Martial Arts Experiment is a form of experimentation that was conducted under Ainz's order.

This experiment was meant to increase the Great Tomb of Nazarick's combat potential in the New World tremendously through acquiring access to its native power which is Martial Arts. Ainz is hoping that by performing the experiment, it can be determined whichever one of the denizens from Nazarick can level up as warriors and learn Martial Arts.

Moreover, while the summoned Death Knight's level was predetermined in YGGDRASIL, he was hoping it could no longer be the case as they are now in the New World that doesn't follow the game rules. Hence, Ainz had the participants including Hamsuke equipped several artifacts like a Powered Suit respectively to test out whether they are capable of leveling up as warriors.

After extensive training, Hamsuke was able to use a Martial Art skill for the first time. However, Ainz's summoned Death Knight was unable to learn it after all the time spent training equally alongside Hamsuke. Furthermore, the Death Knight's level remains the same as always since wearing the artifacts during its training. This proves that the undead monster is incapable of neither acquiring experience points nor the potential to level up beyond their fixed level.[1] In the end, only one has managed to successfully learn a warrior-class skill and used it in battle[2] while the other failed to do so. By learning Martial Arts, it allows one to wear a full plate armor without setbacks. However, through becoming a Martial Art user, it was said that someone like Hamsuke can still make smooth movements with or without wearing a full plate armor.[3]