Underwater seabed off the coast of the Re-Estize Kingdom

A bipedal fishman, with green scales and webbed hands and feet. He also posses long whiskers and dorsal fins.

According to one account, the merman had the air of a military commander like a warlord or a general. The merman though retired still took pride in his immortal soul as a warrior. He believed that giving things away free of charge was a shame. Though he was a powerful individual, the merman had no ambition to use his power and preferred to live in solitary from the world.

In the distant past, the merman was once a demi-human warrior who befriended a human who he fought alongside. The merman soon fell in love with the princess of the country his friend belonged. The princess also reciprocated his feelings, however, there were many obstacles for inter-species marriage with other races at the time. To avoid bringing trouble to his friend and the princess the merman went into exile, settling in the underwater caves near the seaside of what would become the Re-Estize Kingdom. When he departed, he made a promise to his friend and princess that if they ever needed his strength, he would always answer their call.

However, it appears that the merman's true story of his exile was exaggerated by the locals, who over time twisted the oral history and image of the merman into a beautiful mermaid. The instructions on how to summon the "Legendary Mermaid" from the depths were kept accurate for future generations, though none ever tried to summon him and thus the demi-human live in isolation for many years.

Legend of the Mermaid[] 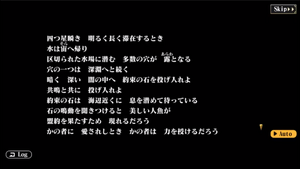 Four stars blink shining bright
Water returns to the sky
Many holes hidden in the separated water are exposed
One of the holes leads to the abyss
Throw the promised stone into the dark and deep darkness
Throw in with resonance
The promised stone is waiting near the beach
When you hear the ringing of the stone, a beautiful mermaid
Will appear to fulfill the pact
To the beloved, they will receive power

Mass for the Dead Arc[]

The Legendary Mermaid was sought by the dwarf craftsman Tsuibayaya who believed that the scales from the “beautiful mermaid” were the key item for his perfect swimsuit. Due to complications, the adventurers from Blue Roses and contact team from the Great Tomb of Nazarick agreed to search for the entity in exchange for armors the dwarf made for the Kingdom. After the group manage to decipher the Legend of the Mermaid, they used a Promise Stone to summon him from the seabed. Once the Stone was dumped in the tide pool connecting to the abyss, the merman heard it and rose from his underwater dwelling. Upon surfacing the assembled adventurers were a bit surprised as the legend seemed to be inaccurate.

The merman surprised that the humans called him not for his strength but for his scales, explained his circumstances of his self-exile. While giving away his scales was trivial, the aged warrior wished to have the adventurers fight him to earn them and sate his warrior’s spirit. Gagaran already thirsting for a fight accepted, dragging the adventurers into the battle.

While the battle seemed to be in favor of the adventurers due to the battlefield being in land, the Legendary Mermaid used some means to raise the tide of the shore. Now in his element he possessed all the advantages and had the adventurers at his mercy. Members from the Pleiades secretly observing the battle from afar, instructed Soi to get ready for a diversion. The undercover adventurer then informed her allies to wait for an opening. The merman suspecting some sort of attack from her concentrated his attention on her and the adventurers. The attacked did not come from any of them, but from a shot from a sniper among the Pleiades. Distracted the merman was left exposed and was attacked by Gagaran with her Fel Iron. The demi-human defeated admitted his loss and gifted his scales to Gagaran, satisfied on the thrill of combat. He was deeply grateful for the call to the surface as not only did he experience a great fight, but saw his lost love which Gagaran was similar to. The merman then disappeared into the depths to live his peaceful exile. News of his existence was revealed to Momonga through his agents, and Solution reported that several summons were monitoring the area where the merman lived just in case the demi-human needed to be eliminated.[1]

It is shown that the demi-human is relatively weak on land. More suited for more aquatic environments, in the water the merman's maneuverability and attack power have speeds that vastly are different. Nearly untouchable in the water, the merman has displayed some ability, either through magic or a magic item, to manipulate the tide, bringing it closer to shore. Additionally, the demi-human appears to be resistant to magic, though a direct attack might injure him.

The merman claimed that Gagaran was the spitting image of his “beautiful” princess.