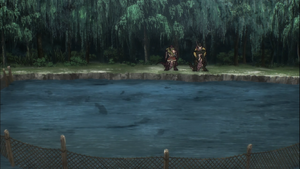 Fish Farm Construction is a form of breeding experimentation for fishes conducted by lizardman natives in the Great Lake.

The goal of Zaryusu to conduct this experiment was so he can breed and nurture the captured fishes as livestock. It served as a means to deal with supplying food for him and his fellow lizardmen.

A lizardman who visit the Great Lake tends to usually check up on the breeding conditions of the fishes they have raised there since its capture. Particularly, the fishes that were somewhat grown already. These kinds of fish could not be left alone without being looked after. It was deemed necessary to obtain fish feed.

In a way, the lizardmen can't start farming fishes if they happen to be hatchlings at a very young age. However, after Demiurge taught them an alternative method in building a more effective fish farm and some basics, it was best to also prepare one for the hatchlings as well. Shasuryu Shasha predicts that within a few years from now, they will have doubled the food supply just from the fish farm alone.

During times when the fish's health deteriorated, priests would suddenly show up to mitigate the problem. When collecting materials to build a fence, there would be many individuals who came to help. When captured fish were separated and allocated, there would be live fish. In addition, there were also fruits brought back by the hunters to be used as fish feed.[1]

Sticks would stretch out from inside the lake, surrounding the area. There were carefully placed very fine mesh nets between the sticks.

In the New World, the idea of this experiment was first started by Zaryusu Shasha and in the end, was successful. Prior to its success, the initial fishing farms were constantly failing. This was expected since they were built solely based on the impressions from talks during his travels.

Still, the construction of the fence was met with various setbacks along the way. After a year of trial and error, although the fish farm was created successfully, there was still more work to be done in the future.

The fish in the breeding farm had died out many times due to experimenting with a wide variety of food for the sake of finding out what kind of feed was best. There were also instances of the surrounding nets being broken by monsters, freeing all of the fish.

After Nazarick's takeover, the construction of fish farms were being carried out at extreme speed. There were currently three gigantic fish farms made so far, with the fourth one, on the way soon.[2]

Retrieved from "https://overlordmaruyama.fandom.com/wiki/Fish_Farm_Construction?oldid=241181"
Community content is available under CC-BY-SA unless otherwise noted.