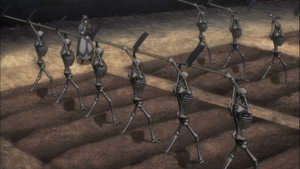 Empire's Undead Labor Project is the tentative name to described this work organized by the Baharuth Empire.

The Baharuth Empire wanted to use the low-tier undead as laborers for farm-work and other purposes along the way. Considering the cost, efficiency, and optimization, the use of undead was chosen for this project over their golem counterpart. For instance, the goal of this project was the strengthening of the Empire’s military might.

Deploying the undead to the farms would yield great benefits, like reducing the manpower required from the living. Along the way, it can lead to a price drop for farm produce. Farmlands could also be expanded upon, while injuries and death to humans on the job could be prevented. On the other hand, by leaving the production lines to the undead and freeing up the manpower for other areas, it would eventually lead to a larger pool of people from which excellent knights could be drawn.

One being that the Empire's group of priests opposed this project due to the notion that using the undead which were the manifestation of the hatred of life, was corrupting the souls of the dead. It was noted if the Empire were facing troubles with food shortage, with many dying from famine, it would be easier to persuade them to follow through with the project. However, since the food supply of the Empire was ample enough and there were no problems in terms of laborers as well, the priests felt the project was deemed unnecessary.

Not only that, but the unease of relying on the undead stemmed from the human laborers who are managing job security. They were concerned about whether to place their faiths in the obedience of the undead not trying to act against their control. Also, in places with a large number of undead, the balance between the dead and the living may end up being broken, leading to the creation of even more powerful undead spawning. It was an obvious source of unrest for people who often listened to the religious sermons of the priests.[1]

Retrieved from "https://overlordmaruyama.fandom.com/wiki/Empire%27s_Undead_Labor_Project?oldid=251207"
Community content is available under CC-BY-SA unless otherwise noted.