Overlord Wiki
Register
Don't have an account?
Sign In
Advertisement
in: Terminology, Mass for the Dead Terminology 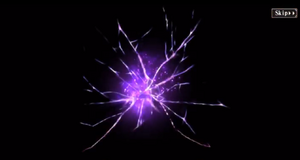 Cracks () also known as "World Cracks" (世界を砕いた罅) is a term to refer to strange fissures found throughout the New World and Nazarick in the aftermath of what the inhabitants call the "Catastrophe" or the "Incident" (異変を) in Mass for the Dead.

A Crack is a phenomenon formed in the space of reality itself. They are found throughout the New World as a result of a phenomenon that occurred roughly half a year before the transportation of the Great Tomb of Nazarick to its current location. Found throughout the New World glowing eerily purple, emitting strange energy and monsters. Due to the new dangers form the anomalies it caused upheaval of the order of the world and the downfalls of several nations like the Roble Holy Kingdom and Dragon Kingdom. For the sake of survival some nations such as the Re-Estize Kingdom, Baharuth Empire, and Slane Theocracy have put aside their differences to sign the Tripartite Agreement and create the Tripartite Alliance to better understand and safeguard themselves in the new world.

Prior to the Incident, a group had sensed the approaching disaster and gathered to confront it. Among those included a very long-lived dragon who set out to recruit others such as Olasird'arc Haylilyal. However none of them returned from their battle against the cause of the Cracks and it was believed that they had failed and perished.[1]

So far the cause of these phenomena is unknown, as nothing in the written history of the surrounding nations has experienced such a magical event. A few denizens in the New World have their own conjectures. Some hypothesize that the Cracks are a creation of a deity; those from the Slane Theocracy believe it is a sort of divine test.[2][3] Others in Nazarick believe that there is a sort of intelligence behind them.

But what is known by the inhabitants of the New World is that monsters that go near the fissure go wild. According to one theory, there seems to be some kind of poison to be leaking out from the crack, affecting organic matter creating a new breed of mutated creatures known as Contaminated Beasts.[4] Infected creatures are not the only danger, as these Cracks give birth to unique creatures known as Chaos Beasts. These beings are wrought entirely of a strange substance known as Chaos Stones. The Cracks act as gateways to the New World to another dimension known as the Chaos Zone. Occasionally the Chaos Zone spills out into the New World, for brief periods, bringing legions of its own ilk, before retracting back into itself.

Additionally, it has been noted that the Cracks have disrupted the magical laws of the New World. In fact transfer magic is difficult and may not work. Resurrection magic is also impossible as discovered by Nazarick.[5] Attempts by Nazarick have tried to gleam what lies beyond the Crack, however, their summons are immediately lost when they cross through the threshold. Even when the summon is tied with a rope, the link is immediately broken. It is assumed that the Crack connects to a world where conditions for living and nonliving materials are impossible.[6]

Based on Nazarick's experiments, Chaos Beasts can be summoned by using Chaos Stones as catalysts. The Cracks also appear to be connected to other worlds, as it can also summon other beings, but so far only the Crack on the 10th Floor of Nazarick possesses this summoning characteristic.[7] Unlike the Cracks in the New World, Cracks found on other worlds are brief and possess none of the noxious contaminants or releases Chaos Beasts. Further more, these Cracks instead draw things toward them, only closing until something has crossed into its mouth. The beings that use these Cracks are able to safely cross over into the New World without any ill effects.

It was originally believed that Cracks could only form in one given area, but through a bizarre turn of events a record of three Cracks have simultaneously manifested in the same location.