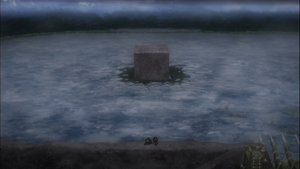 Area of Effect Magic Experiment is a form of experimentation conducted by the magic caster, Ainz Ooal Gown.

As an experiment he was always curious on doing, Ainz wanted to perform it in determining the area of effect. He was interested to see how much of a magical change it can affect in the New World compared to YGGDRASIL standard. The underlying question behind this experiment is that since in YGGDRASIL, the spell's effect could cover an "Area", he wonders how large would the scope of an "Area" be after being transported into this New World.

Different sorts of area of effect tier spells were experimented on and used in various locations. However, the frequent testing site it was known to be tested at is in the Great Tomb of Nazarick. Particularly, on the 8th Floor of Nazarick where Ainz's Super-Tier Magic was experimented upon. On the other hand, experiments were also done outside the tomb. One of such locations in the New World that are used for these endeavors is the Great Lake itself.

According to Ainz, the super-tier spell the Creation's area of effect was described as being larger than expected. Ainz considered it a success in terms of all the magical experiments he had previously tried out so far.

However, since it had only been conducted inside Nazarick, it was not clear what effect it would have in the world outside.[1]

Retrieved from "https://overlordmaruyama.fandom.com/wiki/Area_of_Effect_Magic_Experiment?oldid=248618"
Community content is available under CC-BY-SA unless otherwise noted.