Amphitheater is the grand arena of the Great Tomb of Nazarick.

In this Colosseum known as Amphitheater, the intruders would be the stars of the show. The ones who will be watching their battles from the VIP box are consisted of Golems and members of Ainz Ooal Gown. The main event, of course, would be a brutal melee. Apart from the 1500-man invasion of Players and NPCs, every single invader was said to meet their end here.

The Colosseum was oval in shape, 180 meters on its long axis and 150 meters on the short axis. It was 40 meters tall and modeled after the arenas of the Roman Empire.

The Amphitheater is a large arena surrounded by several layers of an auditorium. This oval complex had a length of one hundred eighty meters on its long axis, a width of one hundred fifty meters on the short axis. As well as being the height of forty meters tall. It was modeled after the Colosseum of the Roman Empire. The audience consisted of numerous golems that acted as spectators.

While so, the sky shown here in the Colosseum could change depending on the time of day, even showing an actual sun with appropriate daylight effects. 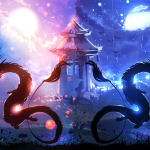