Overlord Wiki
Register
Don't have an account?
Sign In
Advertisement
in: Candidates for Revision, Spells and Skills

Unknown Intruder, this article requires your contribution to the Overlord Fandom!
It is clearly in dire need of a serious cleanup. You can help the Overlord Wiki out by improving it in a way that matches the wiki's layout guide and standards or simply providing a proofread and grammar check.

The maximum amount of spells a level 100 player could learn was 300. However, Ainz used his special ability "Dark Wisdom" to learn and memorize 718 different spells. Even those spells he had not learned could still become a weapon to read his opponents’ strengths, once Ainz knew of them. As part of Ainz Ooal Gown, he was easily ranked in the top five amongst his guild members when it came to magical knowledge.[1]

Though his class and abilities are not suitable for PvP, Ainz Ooal Gown was a PvP/PKER guild in YGGDRASIL, proving he was well versed in fights and ambushes, which has allowed him to score a win from players optimized in PvP many times. His chances of victory in PvP combat were quite high. Still, Ainz tended to lose against players who had flawless builds. Despite his shortcomings, Ainz was confident enough that he wouldn't be so easily defeated by someone who only relied on high stats. Moreover, he was adept with useful information imparted from his fellow guild mate, Punitto Moe in regard to fighting players.[2] Eventually, these skills and knowledge became vital to him once he was in the New World due to his tactical experience now making him a competent military leader or advisor. This was apparent when both Neia Baraja and Gustav Montagnés felt genuinely surprised and impressed by Ainz's military competence and skills in guerrilla warfare and strategy that they ultimately sought him out for advise. For instance, he was able to assist them in their military campaign to reclaim their occupied lands and kingdom. This in turn, caused someone like Neia to develop a genuine sense of respect, admiration and even loyalty to the Sorcerer King.

Because of going for the Overlord race class, he had to take a bit of an RPG approach to the game by focusing on classes and skills that were specifically involved with death magic. This meant that he did not focus much on pure combat magic as much as other magic casters. Some did indicate that he was actually weaker than them in actual combat. In the game, Ainz could not be counted as the greatest among the Players of YGGDRASIL.

Meanwhile, there were other players out there who were better than he was in PvP, and the odds of his survival against stronger players than himself were not that good. Although he won PvP battles with surprising regularity, that was only after forfeiting the first round of each match. Since he was very skilled at using the information he had gathered, Ainz’s technical skills were unexpectedly high. Conversely, if he fought an opponent he had never encountered before, his chances of defeat would also be very high. Ainz was fully aware of his abilities and was deeply grateful if he did not encounter a powerful enemy that he knew nothing about beforehand.

During his times in YGGDRASIL, Ainz had spent at least a year memorizing every single position of the spellcasting console that contained each one of his spells. Ainz always felt that his good PVP track record was due to his own practical diligence over the matter.[3]

Furthermore, Ainz belonged in the category of "Others." To the guild, Ainz Ooal Gown, "Others" were players with challenging classes who could adapt to many different circumstances. Ainz used the drops from PKing — the corpses of other players — to learn many different spells. Because of that, he was typically placed in this position during dungeon raids. However, he was not given this position because he could use many different spells, but because he could use suitable spells for the appropriate situation. Because he had to handle this difficult task, Ainz had priority on the corpses from PKing, as a sign of his comrades’ faith in his abilities.[4]

In the New World, because Ainz doesn't underestimate his opponents and is cautious about them, he tends to plan out the fight before readily engaging them in combat. Ainz will make steady preparations first and tends to take any advantage he can in order to be one step ahead of his opponent. This includes gathering cash items, using his guild members' equipment, or buffing himself up before launching an attack on Shalltear Bloodfallen. As an arcane magic caster, Ainz is already a strategist and tactician who can hold his own in battle, even against a warrior. This is shown when he defeats Shalltear, who happens to be a hard counter to his necromancy and summoning skills. If Ainz is placed in a situation where he has to prepare his equipment for battle, after considering his opponents’ abilities and skills and planning out his tactics, he will be quite confident in his ability to select the appropriate set of gears and items to best combat the foe he is facing.

For a pure arcane magic caster such as Ainz, his selection of weapons are very limited, largely to staves, daggers, and the like.[5] Although Ainz cannot use certain weapons due to his class restrictions, there are actually possible ways to bypass such setbacks. Particularly, items like a long-sword weapon imbued with some sort of magic which can waive that class restriction and let him use it.[6] Moreover, he makes modifications out of New World items, such as the elemental weapon Frost Pain to use its spell 'Icy Burst.'[7] Simultaneously, while another spell like 'Perfect Warrior' is still-in-effect, he is unable to use the rest of his other remaining spells. In that form, he is also able to waive class restrictions, enabling him to equip items without suffering under any class penalties whatsoever.[8]

On the other hand, Ainz can use the mental bond with his summoned monster for orders to command them.[9] Likewise, Ainz is able to send out another type of mental command to his prototype staff, which is used to initiate the weapon's ability for offensive means in battle. Similar to natives like Clementine in the New World, he is capable of releasing 'Fireball' or acid-type element spells from a weapon such as the stilettos, but only if magic casters like Fluder Paradyne are to cast it with their own magic. Also, Ainz can even use an unknown skill to temporarily boost his 1st-tier spells to the equivalent of 10th-tier spells.

Additionally, Ainz states that he has an anti-scrying offensive barrier activated against divination magic, preventing enemies like the Sunlight Scripture from being observed by their higher-ups. With the barrier in use, he can also link another higher-tier attack spell of his own kind like a widened Explosion back to the user of divination magic from where they are located at.[10] Aside from that, his magic resistance can completely negate the effects of low to mid-tier spells, regardless of how powerful their casters are.

In direct close combat, Ainz's strength stems from his prior knowledge and battle experience during his times in YGGDRASIL, using it to fend off the New World natives and their Martial Arts' skills. Yet at the same time, he cultivates and gains new knowledge plus experience based on his encounters with Gazef Stronoff and Clementine since then as a front-line fighter. Currently, he has been having ongoing training under Cocytus as a warrior then putting that practice to test through fighting the workers.[11] Such efforts are also shown during Ainz's battle against the Martial Lord by including the usage of his other abilities like Despair Auras or Negative Touch. During his fight against Buser, Ainz displays some degree of skills with using a halberd and planning a feint attack.[12]

Unlike YGGDRASIL, where his summoned undead each had a specific time limit for when it would disappear, Ainz can summon/create some of them in the New World without requiring a duration. Particularly, Ainz's middle-tier undead are the only known kinds which can be made permanent and not disappear through the use of a corpse or any parts from its body provided.

Hence, Ainz is able to largely amass an army of middle-tier undead comprising of Death Knights and Soul Eaters over the course of time. With such massive forces, he will then have them be transported to places of his choosing via the [Gate] spell. Despite having such a large number of undead held within his control, he has trouble telling the difference apart between which Death Knights or Soul Eaters specifically to issue orders to.

Although Ainz is an undead necromancer, he is even capable of summoning angels by casting and using a super-tier spell rather than just merely the undead alone. However, since the angels are not undead, they don't receive any benefits whatsoever from his Necromancer class(es).

Whenever Ainz is equipped with the Staff of Ainz Ooal Gown, it allows him to gain access in being able to summon forth the Primal Elementals from different elements exclusive to this guild weapon wielded by the guild master.

Ainz was compared to other players actually in the lower ranking or at best medium ranked in power among the upper tier magic casters.[20] Due to wearing all divine equipment,[21] Ainz is seen as a lot stronger and was much higher in the ranking than he otherwise would have been. In addition to that, he is immune to the fire element as long as he has them equipped.

Touch-san gave himself a scarf, but I think I’d like a big, flowy red cape...My sword would have to be huge, just like Warrior Takemikazuchi-san's. I could swing it around stylishly. -Momonga 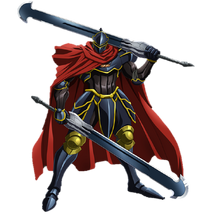 Under his Adventurer Persona as a warrior, all of the items he is equipped with are relic-class items, two tiers lower than Ainz's main gear.[23] Though his technique is rather rough and he doesn't use any martial arts at all, his great power doesn't seem to have a problem with it. However, Ainz's fighting style becomes a lot more skilled with dual-wielding two greatswords than ever before upon using the spell, "Perfect Warrior." Despite not having any spells to use while in this transformation, he is able to make up for this weakness by summoning elemental weapons stored within his item box like Frost Pain Modified, etc. and then throwing it at his target to initiate a spell.

His other alias Momon, "Dark Hero," is looked upon by the adventurers and workers as someone who has the tremendous physical ability and can fight on even grounds against a devil of difficulty level 200+ (Jaldabaoth).[24]