All posts by Makeshift01

It was mentioned in volume 3's intermission.

Jircniv invited Gazef to come to the Empire before the start of volume 1.

That's just what they want you to believe, in reality she wasn't pregnant. That description of Solution's transformed hand as well as the appearance of it in the anime is just to throw you off.

So basically, they didn't show anything worthwhile in the anime. And I like how you just casually left out Mare.

Since Ainz and the other NPCs are limited by the Yggdrasil system they shouldn't be able to learn or create spells from scratch like New Worlders even if they were to learn the theoretical aspects of it. The only way that we can think of in order to lift this restriction would be to use a World Class Item like Ouroboros to change it.

However since Ainz has the [Dark Wisdom] skill, he should be able to use sacrifices to learn already existing spells that he has already met the requirements to learn. For example, he's not able to learn spells outside the Arcane-type like Spiritual and Divine or spells that conflict with his Karma value. And even if he was able to learn and use them, they wouldn't be ideal to use in combat without any supporting jobs to increase their effectiveness.

The thing about [Dark Wisdom] though is that in the game it only worked by using the corpses of Players, and there are no known players in the New World other than Ainz himself, so it's unknown if the skill will operate using the corpses of New Worlders or not. So even if someone in Nazarick was able to learn everything about creating spells and made a New Worlder to actually use it to make a new spell that could be learned through [Dark Wisdom] it's unknown if the skill itself will work.

As for the Nameless Spellbook, it should be able to allow the wielder to learn or use any spell in recorded in it without considering restrictions like incompatible jobs and Karma values. It might also be able to lower mana cost, decrease or eliminate casting times, and other things that can increase a Magic Caster's prowess. However, since we don't know how it operates and all of it's functions it's only speculations.

A reply to Da Daimyo
2

Beach episodes have fan service, this did not.

A reply to Kenneth d Rivera
1

Ice Dragons and Frost Dragons are basically 2 different species of Dragons as far as we know.

Ice Dragons in Yggdrasil were far stronger and more difficult to deal with than the Frost Dragons that we've seen in the New World.

Also if we're talking about whether Sebas is part elemental Dragons it's unlikely, since a lot of Overlord is based off of D&D especially the Dragons. So an Ice Dragon in Yggdrasil is probably equivalent to a White Dragon, who are also called Ice Dragons sometimes, in D&D so they should have a similar karma value to them which Sebas doesn't have at all and I can't imagine Touch-Me wanting to make an NPC from an 'evil' race. Especially when White Dragons are considered the weakest of all the Dragon species.

And based off of Sebas' abilities it's unlikely that he's an elemental dragon since he has no jobs that increase those natural abilities and is instead basically a pure monk. And since we know that Touch-Me is a person that likes to min-max abilities and optimize builds, I don't see why he would choose to not build off of racial abilities.

His Dragon half is most likely a Metal Dragon of some form that specializes in physical combat. I think he's either a Gold Dragon, Bronze Dragon, or a Steel Dragon.

Both the LN and anime did bad in volume 8 and the adaptation when they decided to feature Carne Village as well as Enri and Nfirea's love story.

@Onida DSTY it was implied he did since he was bragging about his higher magic defense than Shalltear, indicating that he could tank the hit while she dies.

Plus there's no friendly-fire safety in the New World, and Fallen Down is an AoE Super-Tier spell he casted on her while they were right next to each other.

(edited by Makeshift01)
A reply to Jodiak
2

As for how attacks are calculated, all the stats you see on the character sheets are only for reference and it's hard to apply them together with all the equipment, racial abilities and skills that amplify and reduce their effects against similarly leveled entities.

Basically, no matter how much you want to theory craft about the relation between their stats and the actual strength of their attacks and defense, there's just not enough information to accurately determine it. There are exceptions to this though, like when it explained how Ainz and Shalltear's invulnerability works.

(edited by Makeshift01)
A reply to Jodiak
1

Ainz did get hit by his own Fallen Down in his fight against Shalltear at the end.

(edited by Makeshift01)
A reply to KaineDaCharizard
2

It's not a living thing, it's literally a weaponized golem without sentience so it doesn't have a race or levels. It'd be more accurate to classify it as equipment.

They might be able to use the Nazarick Master Console to transport him out too since he's an object owned by Nazarick, or they just used Teleportation Magic.

(edited by Makeshift01)
A reply to Kenneth d Rivera
2

It doesn't say that it's limited to the family of Frost Dragons that took over the Dwarven Capital. So this is a poll for who would win between all of the Frost Dragons in the Azerlisia Mountains vs. Blue Rose. Easy win.

(edited by Makeshift01)
A reply to MyFeetAreCheese
2

That kid shouldn't have been speaking all that German if he knew what was good for him.

Emphasis on "just about".

A reply to Onida DSTY
1

Them some fighting words you stupid lizard.

That was Disfigure's way of saying it won't happen. Don't get ahead of yourselves.

They're mercenaries from summoning scrolls, the only requirements they need is the mercenary scroll for that monster, in this case Doppelgängers, and Yggdrasil gold to summon them. It's not mentioned how many Doppelgänger scrolls are in their possession or whether they have a lot or few.

As far as we know, all mercenary type NPCs summoned this way don't disappear and don't need any additional resources or spells to continue existing.

The exact number is unknown.

The ones that we do know of are Pandora's Actor, the Erich String Orchestra, Narberal Gamma, and an unknown amount of regular mercenary Doppelgängers like Doppel-Caspond.

PA and the ESO are Greater Doppelgängers though.

That's the web novel map, the LN has a different map that doesn't include those things and it was released in volume 9. 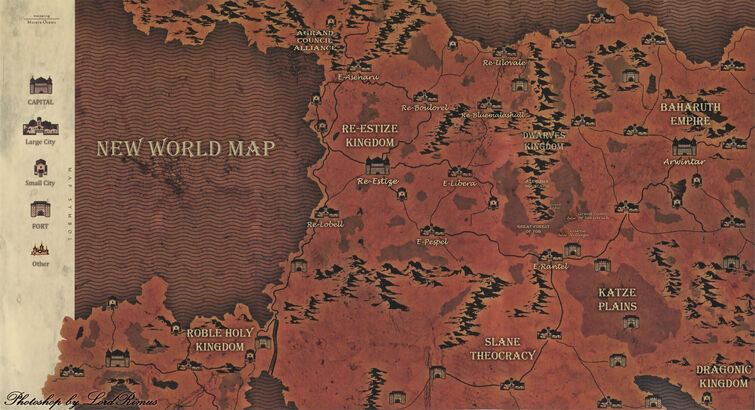 It was never mentioned in the LN that there were 3 separate countries so it might end up being different than the WN.