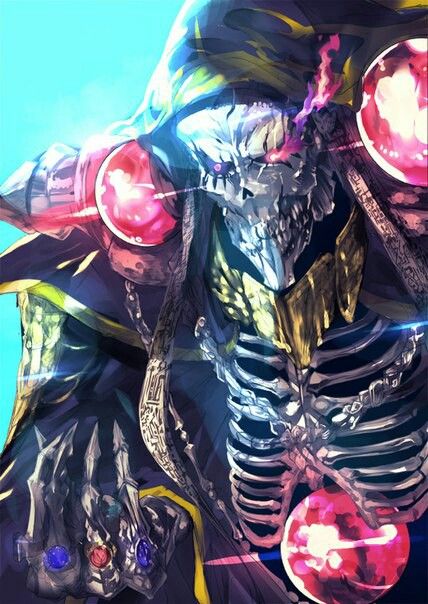 This question is mostly for people who knows about D&D

As a Player or Monster? Cause they would need two different scaling systems. TLDR yes

As a Player Ainz reminds me most of a 3.5 Character with a mix between undead race levels, Sorcerer, and prestige classes geared towards magic users. His Ability Scores from highest to lowest would be something like Charisma, Constitution, Wisdom, Intelligence, Dexterity, and lastly Strength. Ainz is very Charismatic, easily in the high 20's to low 30's, he can deceive Demiurge and Albedo after all. Constitution would be next, he's not as tough as tanks or warriors but a mid to low 20's keeps him up after tanking some of Shalltear's blows. From here on his stats are all under 20 though. Ainz is a solid tactical thinker and is pretty good at picking up on what's on other peoples minds, both hallmarks of alright Intelligence and Wisdom scores just comparing him to Demiurge and Albedo all the time doesn't let him show it. Wisdom 16, Intelligence 15. Ainz isn't known for his feats of Dexterity and Strength. The few times he does display such a thing is only after he changes his panoply to incentivize these abilities. I would say there both plus modifiers given that he never displays a lack of balance or muscle...im sorry.

As for what level he would be it gets a little tricky. He is clearly higher than level 20, considering that he can cast back to back 9th-level spells like Gate. Spells of the 10th-tier are roughly 9th-level D&D spells and Supreme Tier Magic is equivalent to D&D's Epic Magic which players never get. Ainz's Supreme Tier Magic does seem to be on par with 11th-level magic which would require at least a caster level 22 to cast. Naberal at Level 70 can cast up to 10th-tier magic, or 9th-level spells. This is also when Yggdrasil players start learning Supreme Tier Magic. Scaling 70 to 20 we get 100 to about 29. Assuming that his undead levels also contribute to his Caster levels, we can safely say Ainz is a level 29 character. Any other enhancements to his base ability would come in the form of Quest boons earned through play, if we attempted to include things like Dark Wisdom and spells known, than our character level would most likely double.

Now lets calculate Ainz's power as a monster. Lets start easy, a creature that is a full caster has a base Challenge Rating of two-thirds their Caster Level. So Ainz is at least CR 19. From here Ainz can only be damaged with weapons that are at least Relic class and spells 7th-tier or higher. The D&D equivalent would be Rare Magic Items and 6th-level spells. A high enough level and well traveled party could scrounge up enough Rare Magic Weapons to outfit their Warriors, but the casters will have a hard time only being able to effect Ainz at most four times each. This considered it would only push our CR up to about 20, Ainz's resistances are most successful at keeping level 10 or lower players from being a threat of any kind. His true power lies in his mental deviousness. Ainz would never stay in a fight he didn't know was coming, or challenge someone without spying on them first. Given that at the start of a fight Ainz can drop four CR 14 or two CR 18 monsters on his foes, Ainz can almost always buy enough time to escape or analyze the threat. From here his magic specialized to inflict the greatest negative condition of all, DEAD, and the key members of the party starts dropping like flies. For these reasons I think it's safe to call Ainz base CR 22. This puts him up with Arch Devils and Demon Lords in threat level, but were still have more to go.

So far our analysis has only been about Base Ainz. A bare naked no magic items Overlord. So naturally we got to put his panoply on and adjust accordingly. Except most of Ainz's panoply has been kept pretty vague. Of the few we do know about we can pull some important power ups. Firstly Ainz's ring that counters Divination, so no prefight spying. Next Ainz has a full set of Divine Class Items, which I am considering equal to D&D Legendary Magic Items. After that we have to remember that Ainz has a massive wealth of other magic items, so if he needs to he can escape and prepare a counter panoply. Finally if Ainz gets desperate enough he can call on the power of The Staff of Ainz Ooal Gown, which would make it like having to fight Two CR 22 threats at the same time. Ainz has some powerful magic items and is more than worthy of being called an end game boss, but despite all this we still haven't even touched on Ainz's most powerful of weapon of all. Ainz always has backup.

There a eight level 100 NPC's in Nazirick that will, no matter what, come to Ainz's aid. Eight other CR 20 creatures. They live to serve and protect him from any and all harm. Death is but an inconvenience to them. Under them are armies of some of the most nightmarish of creatures imaginable. Not to mention the Meat Grinder Dungeon that is Nazarick that protects them.

Ya Ainz is very overpowered. But is he overpowered enough to survive the Forgotten Realms. Tune in tomorrow for the answer to that question.

OMG thank you for your answer.

I just want to know a couple more things

1 about the rest of the floor Guardian or Roberto

As answers to your second Question about world items in DnD the closes thing would be artifacts(I play 5e the newest version).1 of a kind magic items with at least half of page of lore and stats.They all have completely OP abilities

Well the 9th tier is the highest you can get in dnd, ainz can beat that by two tiers. to put something into perspective, wish (a 9th tier spell) is one of the most powerful spells in existence and takes allot of stuff to cast but ainz has 3 wishes literally on one of his fingers.

Another thing is in dnd lore there was one guy who cast a 12th tier spell and killed the god of magic by accident, while ainz cant use the 12 tier hes only one tier bellow it so he would practically be a god in dnd

Theoretically, using my previous posts idea of Ainz being a 29th level caster, he could cast up to level 15th spells. Now Ainz has never displayed any ability like Karsus's Avatar, so he may just have the slots and not the spells themselves. While fighting Ainz was able to use Reality Slash, practically a 9th level spell, and both Maximized and Triplicated it. That would require the use of a level 14 spell slot, so it's not impossible.

As for calling Ainz practically a god...I think that's a little much. Justifiable, but a little much. DnD gods rule over continent sized paradises that they reshape at a whim, can create armies of angels, deal with managing literal interdimensional threats, planning and replanning the future of their entire universe, and can rewind time over and over again to accomplish a desired outcome. Oh, and there is also a hundred other gods, each with their own agendas and moral beliefs that come first, doing this at the same time also. There is just no comparing gods to nongods.

Outside the divine realms though, Ainz makes a real good showing of power. Ainz obviously towers over mortal, and no longer mortal, magic users. Ainz even considers entities like stock-Balors as no significant threat to his life. Despite this there is still a significant number of things, especially if team play is allowed, that can threaten him. Archmages, Shadow Lords, Archfey, Primordials, Angels, Rogue Angels, Ancient Dragons, Giant Lords, Titans, Demon Lords, Arch Devils, the list goes on and on with no end to those beings that can threaten Ainz directly. That is of course until you factor in Nazzarick and the Floor Guardians, after that the numbers shrink into the double/single digits. Two in particular stand out as the closest to Nazzarick and crew's power, or pass them depending on perspective. The Prince of Demons, Demogorgon, and the Lord of the Nine Hells of Bator, Asmodeus. Both of these entities are terrors in every universe they live in, and manipulate/bully many high CR monsters into doing their bidding. In addition, they command massive hoards of demons and devils. No joke actual Millions of them, way more than the population of Nazzarick. The only thing holding them back is unit cohesion. Both are constantly dealing with plots, usurpers, and traitors; no soul that follows them does so out of love or admiration like how the Floor Guardians follow Ainz.

TLDR-Ainz is no way at all near the power of gods, but is the next best thing.

I understand what you're saying but the way i see it if a 12th level caster can one shot a god then an 11th level caster shouldnt be too far off from being one.

think about it this way, a 12th level spell makes you a god and one of ainz's 11th level spells literally grants him assistance from a god (The Dark Young of Shub-Niggurath) while i dont think ainz would be on the level of a god in DnD he would be the closest thing to it save the strongest kraken