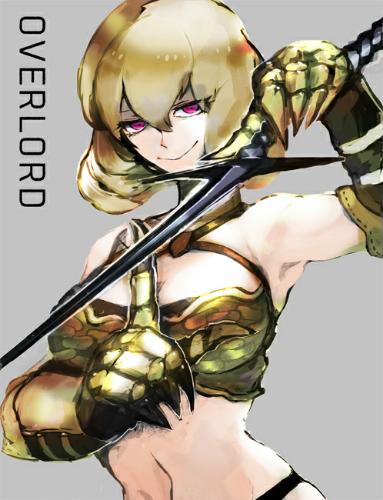 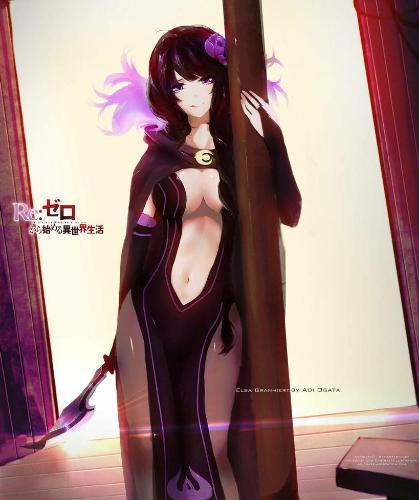 Round one with standard equipment.

Round two with their full equipment, for example, Clementine with her Black Scripture equipment.

I don't know too much about re zero so I don't really know if Elsa full equipment if she has one.

Elsa Granhiert wins, hands down. Clementine has superhuman speed, but Elsa is stated to be faster than sound. She also has a cloak that negates any magic attack, but only once. While these may be advantageous, what solidifies her place above Clementine is her immortality, which is granted to her by an ability she calls “Blessing”.

Blessing: Elsa's recovery ability which can heal smaller injuries like a broken arm, a cut in her back, etc. in seconds, fatal wounds however take more time,

And her regeneration isn't without consequence. After taking fatal strikes around a dozen times, Elsa will essentially become a mindless beast solely intent on killing anything in her path. Also, there seems to be a limit on her immortality.

Elsa doesn’t have any gear beyond her standard equipment, so she remains the same in this fight.

Beelzebub, what do you think about Clementine Stilettos Short piercing weapons excellent for attacking an enemy's weak points. Clementine carried four of these blades on her person and usually duel-wielded them with great skill. Additionally, these stilettos have a special property: they can be enchanted with a single spell up to 3rd tier. The user has the option of casting the spell on a successful attack, As they are stored into the stiletto, the user will attempt to use the magically-enchanted stiletto to land a physical hit onto their target, then later activate the imbued spell upon contact

I think Elsa cloak works on like range Magic to block while Clementine Stilettos requires her to land a hit on Elsa to activate her spells what I'm trying to say is that do you think Clementine fire/electricity arguably the most heavy fatal damage could somewhat reach Elsa immortality limit break or no?

I’ve thought about it, and yes, if Clementine landed multiple stilettos and activated each spell they held in a short period of time, then I believe it would take Elsa down, but the problem is landing the hits in the first place. Both of them have roughly a similar amount of skill, as they each are masters with their weapons, but Elsa does have the speed advantage, even with Clementine’s speed-enhancing martial arts, so landing consecutive fatal blows is going to be very hard for Clementine. I’m not saying it’s impossible, just that Clementine is at a disadvantage, at least without her black scripture equipment.

1: Are You Sure She's Slower? Cuz when Clementine was fighting Ainz in armor, in the light novel, and in the anime she was casually generating a sonic boom,youtu.be/h8MDDzBLZAE

2 but let's just say that elsa has the speed advantage just a bit with the statement about her on the web novel, then it will really come down to on how they fight and i think that clementine has an edge on that one,clementine specialized in dealing stabbing or piercing-type damage. based on her conversations with khajiit, she is also skilled at dealing one-hit kills onto her target makes clementine a formidable foe against the living. however, her fighting style is lackluster against the undead due to their racial critical hit immunity. this is demonstrated in her battle against momon. although unable to damage his armor, she is able to stab him through the visor of his helmet repeatedly, an attack that would have killed most normal opponents, but had no effect on momon.

So I think with this and if you stacked that on top with her martial art,

Ability Boost: Increases the overall abilities of the user.

Flow Acceleration: An art that temporarily accelerates the workings of the user's nerves, increasing one's attack speed and movement speed. The downside to it, however, is that the extreme exhaustion that builds up in the user's brain.

She should come out on top by delivering a final fatal blow but I think that she'll win with high difficulty on her.

Do to Clementine and Elsa being so identical. 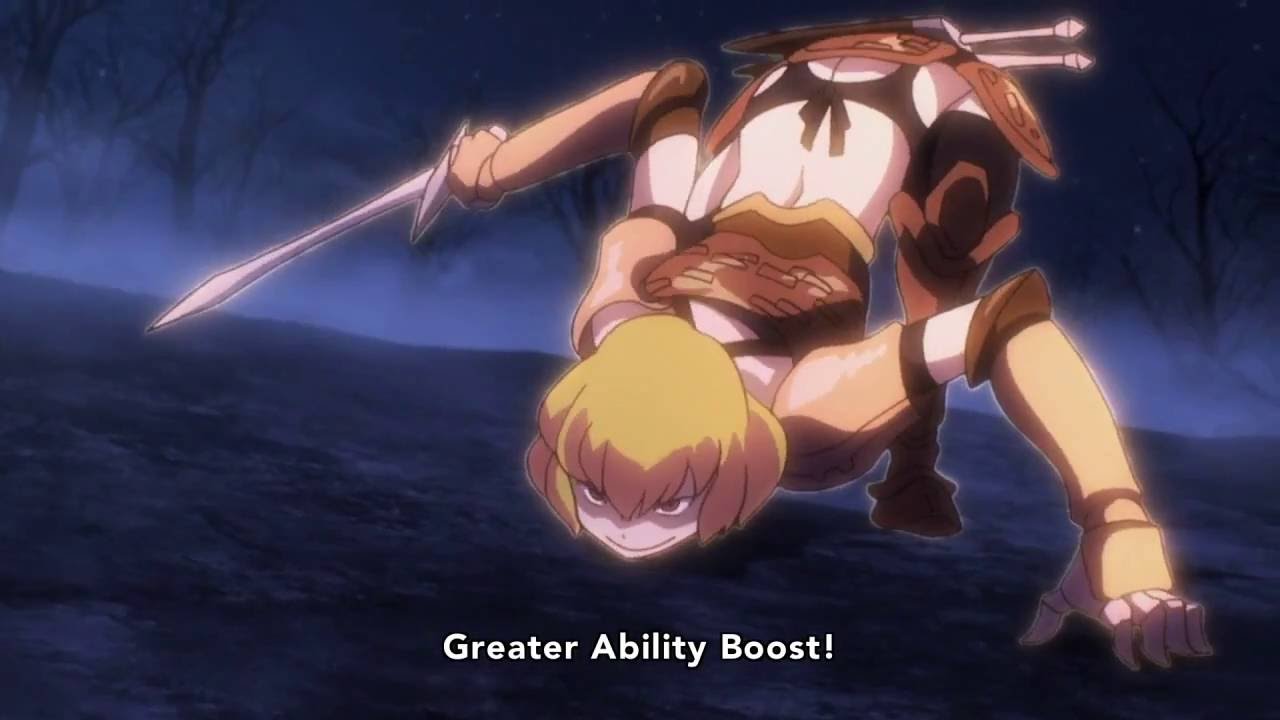 As far as I’ve found, there’s nothing in the light novel that says she generated a sonic boom, and in the anime, it could very well just be a stylistic choice the animators made to show that she was going really fast, not necessarily faster than sound. It is common in anime to use this kind of effect in order to emphasize fast movement. But I’ll give her the benefit of the doubt and concede that she is supersonic. Also, to be fair, if we’re using anime for feats, l have one for Elsa as well.

This clac makes her supersonic+, which is still faster than Clementine. That said, I don’t generally like relying on anime adaptations of light novels to get my point across, since it’s a visual medium that can often stray from the source material in order to make it look better. If you can find where it says in the light novel that Clementine went faster than sound, that would certainly help her case.

0
TBH can't really find what it says on the light novel either I just assumed that my bad, but to make it up to you I'll try to do my best to make a case that she could be comparable and speed,The graded list of warrior type characters presented by the author suggests the approximate level boundaries of this world. Level 19 seems to be the limit one can reach by sheer effort (from Climb, who is weaker than 20 level warrior, Zaryusu Shasha). Level 29 seems to be the limit one can reach by both effort and talent (from Gazef), who is weaker than 30 level beast, Hamsuke). Those who are over level 30 were estimated to be at the "Realm of Heroes" (Clementine). However, those beyond that ranking are legendary monsters like the Evil Deities with the power to overthrew countries seems to be around level 50 (Evileye).Tia is around level 27, so human combatants in the high 20's are lightning timers, beasts and monsters of the same level are even faster since their race itself makes them physically superior to humans. The being that was waved around was the most powerful insect the entomomancer Entoma could summon—(the thousand whips insect) Originally it was supposed to be a whip with the rough shape of an arc, but it turned out to shoot out at an unimaginable angle. This whip was like an extension of Entoma’s hand, and bent in an S shape, before it launched at Gagaran with the speed of lightning. But the fact they (gagaran + tia) could dodge it proved they were indeed adamantite adventurers Entoma is only level 51 and is one of the weakest battle maids while Ainz is level 100 and is far faster than her. Funny thing is she was toying around with them until Evileye appeared. Here is Ainz himself casually dodging lightning fast attacks from another adamantite level adventurer: That’s impossible! What kind of dexterity and motion-tracking vision is that?! “—[Gale Acceleration].” Palpatra continued using his martial arts. You’ve gone too far, old man! Has your brain gone senile too?! “[Dragon Fang Thrust]!” He used the same move from before upon Momon again. Snow-white freezing vapors shrouded the spear’s tip; it was the [White Dragon Fang Thrust]. That lightning-fast series of four attacks— A great commotion rose from the onlookers. That was only to be expected. After all, not a single one of those four attacks had managed to so much as touch Momon’s armor. Palpatra leapt back. His forehead was beaded with sweat; he was not exhausted from attacking, but the mental strain of wielding his spear on deadly ground had been too much for him. “He’s incredible!” “—He’s stronger than Hekkeran.” “But of course, Arche. Don’t compare me to him. He’s what they call the highest-level adventurer, the peak of everything. That’s the power of an adamantite-ranked adventurer.”