We know the Horn of the Goblin General summoned a few Goblins that stay till death/defeated.

To answer your question, the answer is no because monsters like the Primal Fire Elemental summoned by the Staff of Ainz Ooal Gown can only stay around in the New World for one day before it disappears.

I can understand why you would have that belief from the experiment with the Death Knights, but remember they were summoned by a skill with no host body, not a item such as the Horn of the Goblin General.

It's unheard of for monsters summoned from the Staff of Ainz Ooal Gown to be permanent so all we can do now is speculate up to that point. But as you stated before S0NofA1NZ, it was never mentioned whether the Primal Fire Elemental has actually disappeared after being summoned. The one thing we know of was that it can only be summoned 1 time per day. Mid-tier or lower-tier undead are different as it required a corpse to maintain permanency. According to Ainz, his speculation and experimentation on a Soul Eater required it consuming a soul in order to make it permanent. Interestingly, the Death Knight required a corpse to stick around. In contrast, summoning items like the Horn of the Goblin General conjured forth sentient beings which can't disappeared by a certain time limit (In the Web Novel, they can disappear) but can still die in combat and needs to eat in order to survive.

Thank you Disfigure. Also, we do know the Primal Fire Elemental dissipated after being defeated by Aura and Mare by the anime and LN, but what happened to the 3 Moonlight wolves? I was just reading page 62 and on, and noticed that there affected by Aura's ability, but are not mentioned to be defeated or disappear. Their no longer mentioned after the experiment.

Also let's speculate, what if the Staff AOG did summon permanent monsters? Where would he put them? And what else can the staff do and summon?

I imagine the staff can summon all the Primal Elementals and lower tier monster's like the 3 moonlight wolves from the Moon Jewel/Orb. Assumably he would place them in there natural environments like the Primal Fire Elemental to be in the 7th floor where Demiurge resides.

@Disfigure you are correct and confirmed by Maruyama Kugane. The Staff of AOG can not summon permanent monsters which would explain what happened to the Moonlight Wolves and why Ainz doesn't build an army of Primal Elementals. Also, most summoned monsters by magic and magic items usually are not permanent. 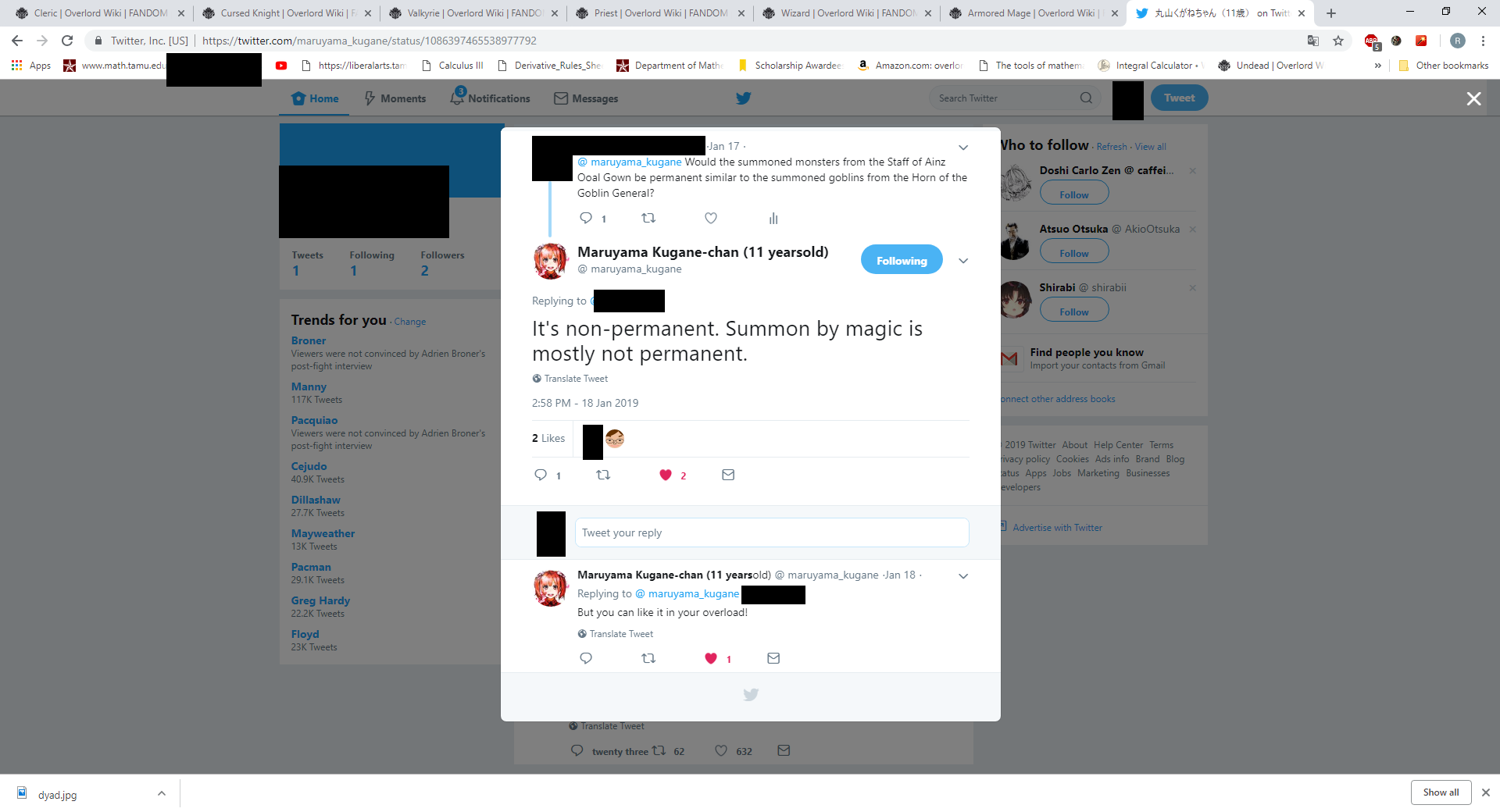 Yeah, I saw you inquiring a question to Maruyama and got a reply back from him.

To be honest my heart skipped a beat when I realized I was looking at a response from the creator. I thought they would just ignore my question since I'm pretty sure they get a lot of questions or focus on other things. I was so excited.