Since WORLD items exist in the NW and some of YGGDRASIL's lore in the NW became/are true such as the lore about Doppelgangers using telepathy to read the surface thoughts to improve their impersonations, It's possible that the lore about the WORLD items, the remnant's of the last 9 leaves are continued to be hunted by the WORLD Tree Eater in the NW too.

This is an interesting idea. Given that none of the NW characters can match up to ainz or the lvl100 NPCs so far, it would be interesting to have ainz face off against something thats much more powerful than he is..

Considering its a world eater, AOG would either be attack some of the more powerful countries in search of players or world items to help him fight against it.OR. He would help the NW characters to train to be usable in the battle. That said, this is a good chance to revive Gazef. I personally feel like his death wasnt final given Ainz's words.

No he’s gone for good. Ainz respects him so he wouldn’t revive him.

Out if the 3 possibilities, the collecting of WORLD items is most likely since Ainz knows that WORLD items exist in the NW from Shalltears incident. The training of the NW inhabitants is very possible especially with the Power Suit (Volume 7 chapter 4 & season 3 episode 6-7) that increases experience. The finding of other player's is an action that will be done, but will be unsuccessful since so far Ainz has only learned about past players that assumably no longer exist because after the battle with Re-estate Kingdom (some would think, me included) good players would show up to defeat Ainz, but haven't either that or choose to live a peaceful uninvolved life.

For Gazef, I agree that Ainz respects him to the point of not resurrecting him during normal situations, but against a WORLD Eater that even 30 Lv 100 players have problems with is illogical. Ainz would choose needs over wants; hence, he would resurrect Gazef apologize in style and explain the situation this is assuming if Gazef's body is in good state.

Its possible that, all the countries of the world or at least the ones with the knowledge of what's going on will join together into an alliance where Ainz will have the big chair calling the shots to defeat the WORLD Eater. During the alliance, its most likely that King Alezandurs possibilities will take place, whete Aunz shares his Power suits to the already strong while being trained by the NPCs to become even stronger and the less strong trained by the lesser stron NPCs; at the same time, the alliance shares their knowledge of weapons, power and WORLD items.

1. Didnt maruyama say that there're no other players in the NW.. That was why i thought since there're no players, the ST would be the likeliest enemies that albedo's team will face.

2. Yes, Ainz respects Gazef and that is evident in him using a spell that invalidates lower tiered ress.. Which also means that Ainz himself can use ress on Gazef. I feel like Maruyama explicitly said that to imply Gazef's revival in the future.. He even said he cast a preservation magic? (not sure)

He said e would have but brain stopped him

To slow down the decay of Gazef's body they would have to cover his body with the blanket "Shroud of Sleep". I'm not sure if "properly clean" and preservation are the same. 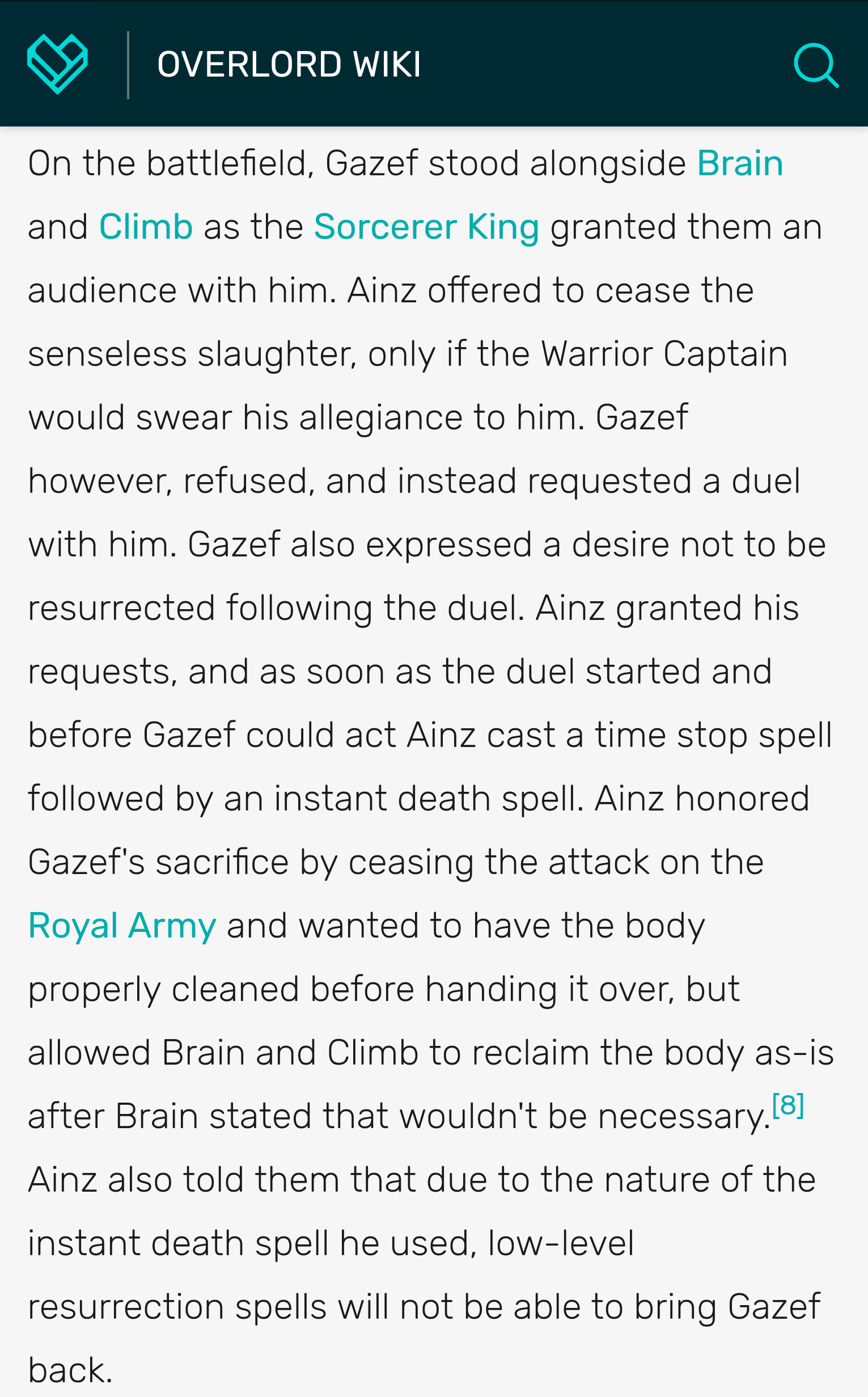 Hight Tier resurrection doesn't care about the body's state of being. Even the cremated Holy Queen can be brought back to life should Ainz want. The only reason they preserved her brothers corpse was incase they needed to kill of his character and need to leave a fresh corpse behind. Besides, Ainz can't resurrect Gazef; because you can't resurrect someone who doesn't want to be brought back, and Gazef said he doesn't. Ainz could have been lying about the spells effect and results would be the same. Gazef's death on the battle field showed that no one in the kingdom, even those who can afford resurrection magic, didn't suffer Ainz's wrath. Gazef's might have saved his kingdom years of infighting.

If the World Tree Eater does show up in the story than it will in one of three ways.

1) Late end of series final boss, no doubt appearing at the same time as the mystery of the transportation to the New World gets explained.

2) Massive threat(actual appearance not necessary, just a vague threat that is mentioned of known of) prophesied in the Slane Theocracy by casting information gathering magic on its World Item(s).

3) Massive threat (same definition as above) used by Ainz in order to make rally support behind him. A "All I/we do is to better prepare us for the day I/we must do battle with the great World Eater," type of thing.

Thank you Hokehokehoke, I forgot refusal of resurrection was allowed. I agree on your introductions for the WORLD eater since those are more likely. If I had to choose which I believed ha's the highest chance I would assume your 1st possibility as the last volume since it would be the final boss and demise since they are crazy difficult even for 30 lv 100s. So I assume the series would leave at a obvious cliff hanger where they face the WORLD eater as 1 under Ainz command.