Imagine you are one of the Supreme Beings of the Great Tomb of Nazarick. How would you Create and Design your own NPC. There are no limit.

Power and Abilities: Max physical atk, magic and speed max everything but she specialized in holy magic/holy equipment and just like Ains, Pestonya and Pandora she can also perform high levels of resurrection because she is part priestess to. And Immune in elements, brainwashing, Demonic magic and everything else.

Species:An Angel of the highest order.

Appearance:2 meter tall her face is beautiful, magnificent and heavenly with elf ears, silver eyes, Purple long hair with a golden hallow on her head, body color brown with tits numder DD and Red and Blue dress with some pieces of diamond in the dress in her back there are two white wings but in fighting mode she has four wings with a golden staff and on top the shape of the Sun and Cross together.

Background:She was created to be the only and forever Pure Lady in Nazarick. And to protect tomb from unholy invitees. And to give great advice to the inhabitants of Nazarick when needed to.

Personality:She has a genius level intellect able to think and react faster then the speed of light. Her courage is made of steel meaning she is fearless in every way. She dislike killing any races but she won't hesitated to kill if someone of the Supreme Beings order her to but she has a stronger connection to her own Creator. She is friendly to everyone. She has a great character and friendly personality if you see her you will fall in love with her without hesitation but sometimes it gets really really annoying for her. Also she able enjoy to eat and drink it is not necessary but she is able. Plus she has a great fashion sense. She can't be corrupt or posses from anything unholy beings. She is the pinnacle of Holiness and Goodness.

I like Aaron’s as naz doesn’t have enough holy creatures, but then again that was on purpose to make it look more sinister.

Honestly my character would have max magic speed and a fare amount put into attack to make a sort of glass cannon capable of taking a few hits.

A hyper girl of 18 gella shipwrecker was created by the supreme being drago bloodriver as his only companion made as an opposite to himself he made gella a well mannered happy girl in love with him as they traveled she weilds the world item OCEAN'S MAKER which allows complete control of sea creatures and makes their 10 spells cost no Mana as long as it is water magic. 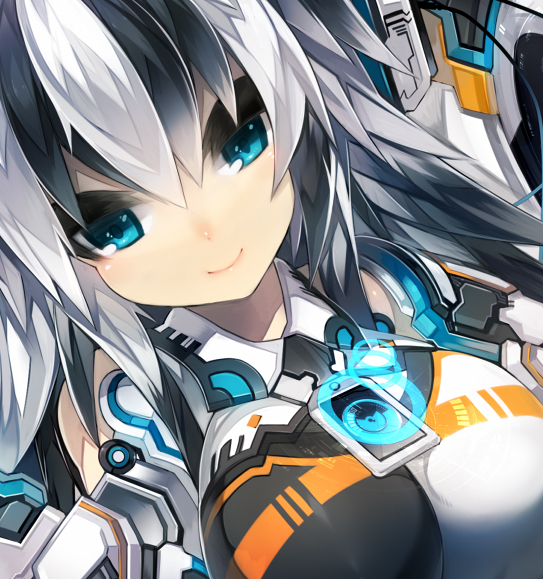 Honestly my character would have max magic speed and a fare amount put into attack to make a sort of glass cannot capiof taking a few hits.

A hyper girl of 18 gella shipwrecker was created by the supreme being drago bloodriver as his only companion made as an opposite to himself he made gella a well mannered happy girl in love with him as they traveled she weilds the world item OCEAN'S MAKER which allows complete control of sea creatures and makes their 10 spells cost no Mana as long as it is water magic.

Well that beat mine xD

All Demiurge's spells, all Cleric and Divine spells, Energy Drain

-Humanoid non-battle Form: Lucy Would have the body of Elizabeth from the anime "The 7 Deadly Sins" with 3 small pairs of wings like Tarmiel (Same anime/manga). The 1st pair would be angelic then bone and finally black wings like Albedo. Has the tail of Demiurge. On Lucy's Head is Albedo's horns then above that a Halo like Victim's. Her eyes are different, the right eye is surrounded by black and the eye itself is white with a black pupil like Tarmiel, often this eye is covered by Lucy's hair. Her left eye is a golden brown. Her usual cloths/armor are her black cloths shown below.

The main body is like "Number 88: Gimmicks Puppet of Leo" from "Yu-gi-oh!" With 1/4th the height of gargantua. The head is of an undead Wraith (basically like Ainz's head) with the horns of Albedo & halo of Victim above. The arms are like "Touta's" battle transformation from the anime "UQ Holder". She has 3 huge magnificent pair of wings (same order as before) that are 3 quarters her height. She still has Demiurge's tail. Her usual armor in this Form is the cloths shown below in the second picture. 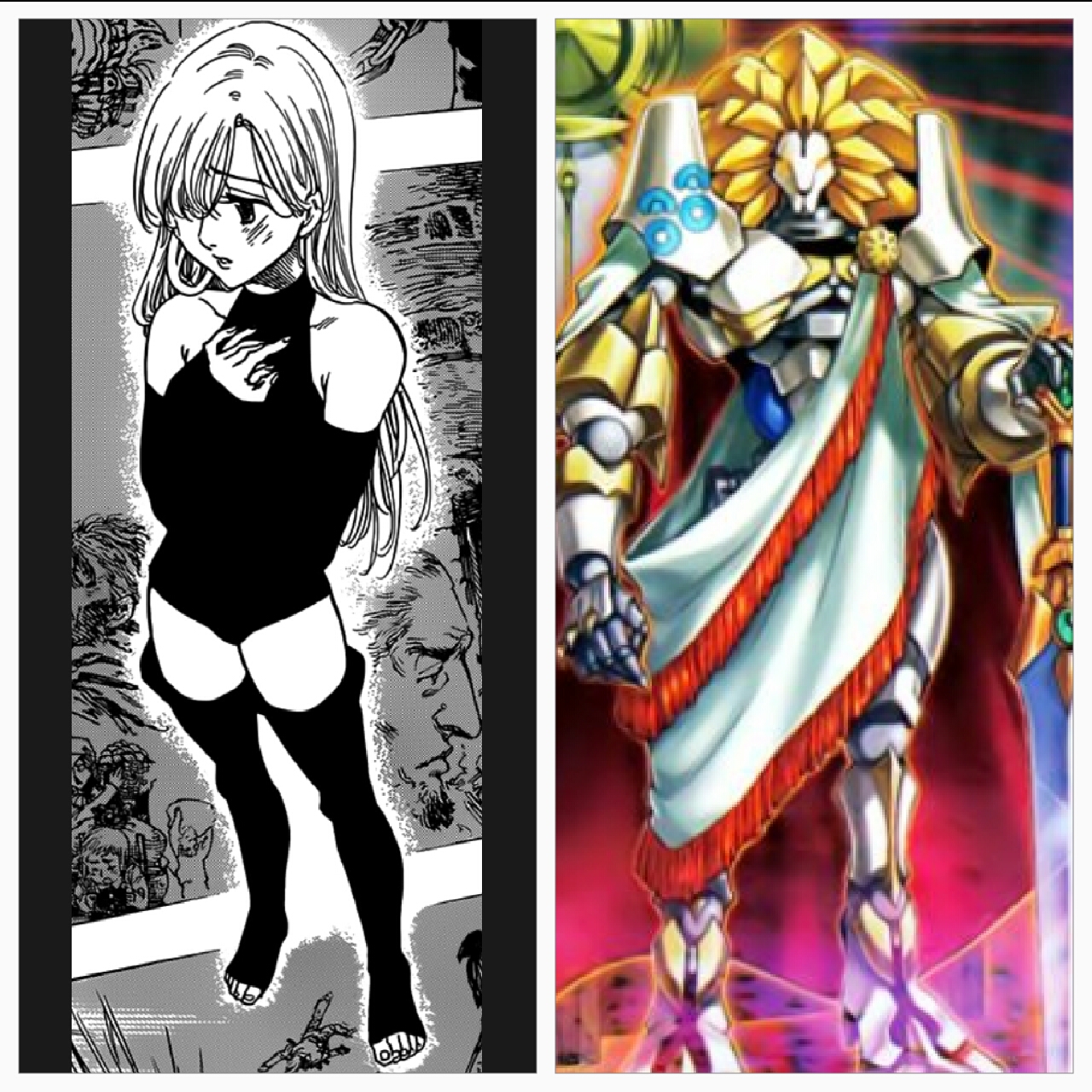 Lore: Very quite, loves to observe, does not like violence, enjoys training as a sport, enjoys mastering different weapons, dislike closed spaces, friendly, dislike unnecessary murder, hates humans with a passion, won't kill humans but will leave/put them hanging on the edge of a cliff, will kill if told by the supreme beings, loves water, enjoys the company of humanoids, demi-humans and heteromorphic, won't forgive those who destroy the forest unless by surpreme beings, Life Goals: Gain Blue Planet's affection, witness the extinction of the human race, learn history.

Appearance: (I think this is from the game Guild War 2) 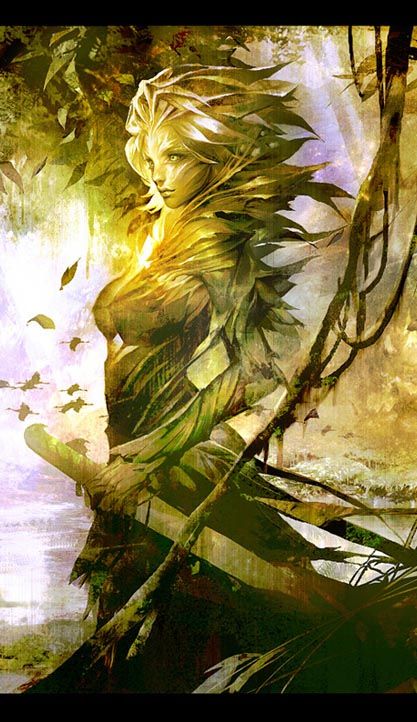 Name: I-AM Messiah Elohim-Jehovah-Adonai aka I'M aka MEJA aka Messiah

- Is majority of the time, he is calm, composed, and gracious with the face of silent compassion, his favorite hobby to do is site see all the floors of Nazarick and all its beauty which he expresses joy, he is all loving, in love he will save you, in love he will resurrect you, in love he will save you from suffering, has an natural charm, usually non-violent, highly intelligent to the point of being/believed to be all insightful with the exception of the Supreme beings, he prays to the 41 Supreme Beings as his 48 fathers and 3 mothers with Ainz as the Highest Supreme Being, Father of Fathers and Mothers, doesn't hate humans, believes that all creatures not created by the Supreme Beings who have not been damned should be given mercy/kindness aka a painless death especially humans, he is often disgusted and saddened by mankind's greed, racism & oppression of the poor usually expressed with a face of sorrow which is somewhat common outside if Nazarick, especially in cities, he prays "Forgive them Fathers, Mothers for they don't know what they're doing." 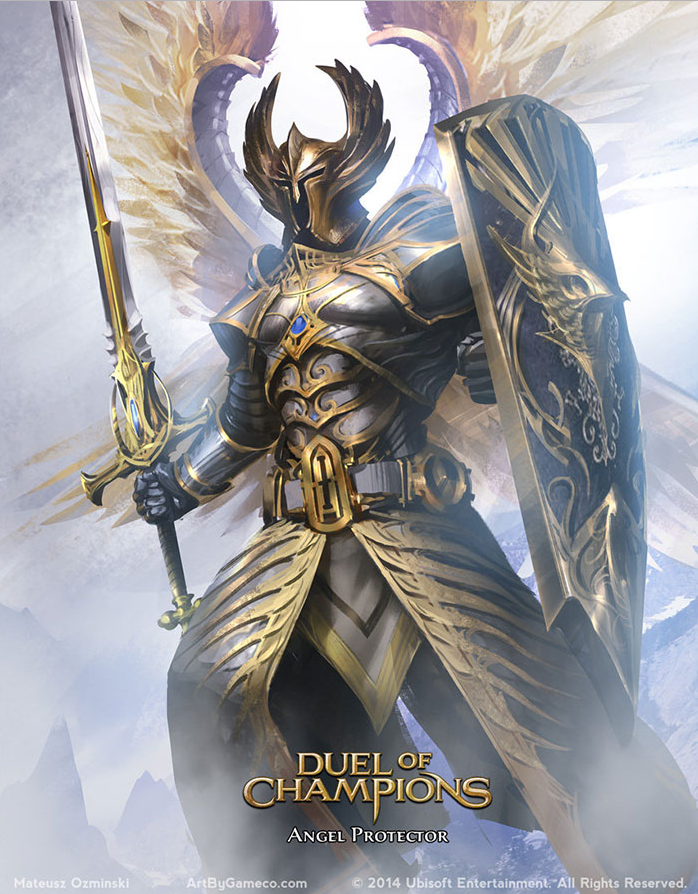 V is usually 4 ft 7 inches with pale skin and a pair of small red thin horns with pitch black short hair that is sleek combed down and rounded. His eyes change from Golden Amber in the day to bright Blue Sapphire in the night and when he gets excited his eyes turn Ruby Red with vertical pupils. On his back are red-copper sporting long bat-like wings and a tail like Demiurge. Usual gear/cloths is a black kimono with a white hoody under. In Battle gear he is 6 ft 7 inches wearing heavy divine gold plated mage armor. Weapon is the Staff Form of STAR EATER.

Was once a human who inhabited a devoured WORLD and reincarnated into an Evil Being created in the eyes of the Supreme Beings whom I give grace for my soul's salvation and utmost loyalty.

Grew in a noble family of abusive parents whom feared me for my intellect and insight, but loved and supported by my older sister. The WORLD ended the day I desired Evil. It was a normal Jeudi (thursday), kicked in the morning, stabbed by jealous peers while embarrassed professors who lost at chess game to an 11 year old gave a blind eye, and when I'm done a good game of stone toss aimed at my head as I walk back home to the mansion. After a few minutes as usual the rocks stop flying and for the rest of the trip, I hear the birds on the trees. Then I reach home or hell.

The day was normal until I opened the door, I heard my sister screaming "WHY!" repeatedly and when I reached her, she was kicking, punching the air struggling while a stranger was holding her high from behind. She noticed me and in that moment she yelled "RUN!", but it was too late, someone grabbed me, my mother. She took me to my father's office where he was held hostage by the beggars. For the longest time ever, he smiled at me, he was feeling hope. By the shoulders he grabbed me and proudly yelled "This is my Son..."; for a brief moment, I believed he was going to reveal a father's love. He tossed me instead and returned to his cowardly tone "...you can do whatever you want with him too, just leave us alone and go!"

As I struggled to escape, the air from the living-room carried my sisters begging screams and tearful moans then it all stopped with a heavy thud. By the hair, the beggars dragged me and my parents to the wide living-room where my sister's nude body was laying on the cold wood ground and blood streaming out of her neck like a river. There I stood staring at my sister, hearing the beggars laugh and my parents finally showing resistance. They fought, stabbed, bite, ripped, slashed all while laughing with pride until my parents got caught and tied up to the wall.

It was magnificent, the beggars slowly stabbed my parents starting from the toes to the stomach then around the chest and down the arms, and for a final touch a small dagger hanging down the throat. Afterwards, the WORLD started to get dark, you can even hear the horror outside, and the joyful beggars began to be terrorized unable to escape. It was like the darkness locked them in the mansion.

They died one by one screaming, begging, crying as the void of darkness filled the home with silence and finally reached me with 1 desire in mind "I want to see that again."

r/overlord - Some imagined WORLD items. Tell me what you think. Add your own, no restrictions.reddit
(edited by S0NofA1NZ)