So the image attached to this post is the pictures of Level 100 NPCs with Ainz at the top. So there's Albedo, Aura, Mare, Shalltear, Pandora's Actor, Demiurge, Sebas and Cocytus. But to the left of Shalltear, we find a character wearing some sort of Japanese dress, which we later find out to be Aureole Omega. Okay.

Now can anyone check what the heck is that to the right of Mare? At first I thought it was Mare's staff, but then saw differences in their shape. Perhaps that is another NPC? Or something else?

On my side, I don't mean to escalate matters quickly, but could that possibly be... the most powerful entity in Nazarick... Rubedo? *dun dun duuuuuuuuuunnnn* 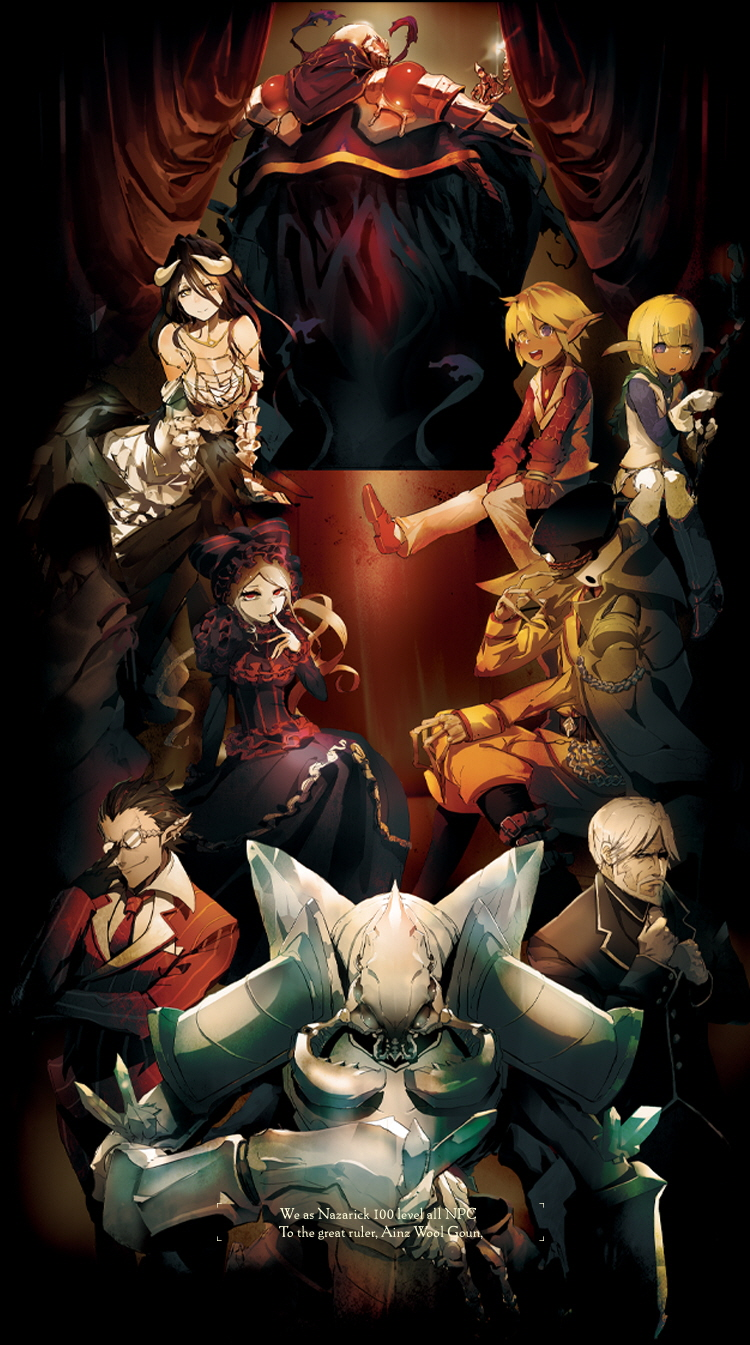 Perhaps that may be so, but it seems too metallic in shape and color to be his staff... And it would be very strange if Rubedo wasn't really fully-leveled up, considering she supposedly could defeat Touch Me, the guilds most powerful warrior, in his own game of close combat, and that the very powerful NPCs of the 8th floor could only take her on together, as long as they were equipped with WI. Unless, like Gargantua, Rubedo might have stats not fitting like that of players and standard or player-build/like NPCs, and more like a raid boss-type of creation.

its very possible that rubedo's levels are in the 90s just like the 7th floor guardian because as long as they put all her stats into combat ability she would be op then add the world class item that powers her, her equipment and weapons which i assume are all top tier and it would make sense that shes stronger than touch_me

it also possible that her level is above 100 since its never stated that the NPCs have a level cap, just that their combined level cant exceed 700 for castle level bases

Ainz Ooal Gown's combined level cap should be around 2750

No, it appears that the maximum level really is 100, even for Custom NPCs.

In the case of less than 100, there are a number of issues. The World-Item-powering-her thing is quite an assumption. The other two characteristics you've laid out are more sensible assumptions, but in that, wouldn't it be too overpowered to have a number of powerful 8th-floor entities nicknamed "Them" using WI at that just to beat one Rubedo? That would mean that Rubedo is not simply a powerful NPC by common standards.

In that case, perhaps the standard of power/strength measurement is different from players and NPCs. Like I said, it's possible she is more like those bosses that are more powerful than a small group of max level players. But then again, can such a case really be created by a guild? Perhaps those like Gargantua, a being given by the Admins, or even the speculated recruited former dungeon bosses of Nazarick would have such standards, but could players really make a dungeon boss-like NPC?

Ultimately, it's a lack of information and details that keep us in a state of blind speculation. Until the author churns out more information, we can only imagine and theorize how these really work, huh...

Wait, sorry. It seems that the NPC level cap can be changed through some methods. So perhaps those methods really were expended on Rubedo to be their ultimate weapon to make a lvl >100 dumgeon monster? It really is still quite puzzling with a lack of info.

Here’s a thought, perhaps she’s not the be-all-end-all of Nazerek due to her level, stats or items but because of some latent ability she has that hasn’t yet been disclosed. (Like victim for example, who when killed somehow defeats any and every foe?) What if they put every single stat point into special, contributing to this currently unknown ability? Like their ace in the hole that they just can’t risk showing before they can use her. Food for thought.

thats an interesting thought but no its not possible, its stated that she has higher melee combat ability that the melee specialist of nazarick (Cocytus Sebas and Albedo) and it was also stated that shes stronger than touch me (who can defeat 3 upper top tier players simultaneously) so her melee stats are definitely off the charts

"Her battle potential was well above that of Sebas, Cocytus and Albedo in terms of pure melee combat, Shalltear would be a weakling in comparison, given the fact that even Ainz in his full equipment would most likely loose against Rubedo"